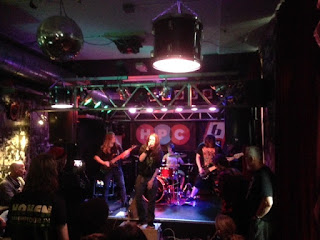 Three young metal bands playing of which two from The Hague, means a good way to spend the Friday evening. The styles ranged from death through modern american to prog metal and contrary to my CD reviews starting heavy slowing down through the evening. Opening band were Inferum from Eindhoven. Their death metal was filled with some neoclassical guitar work at times, by their pretty talented guitarist. I like some variation in vocals, but here we got a remarkable strong grunt all the time, coming out of a rather young vocalist. As they had to drive home still they came, blasted and left again. Nice band though. 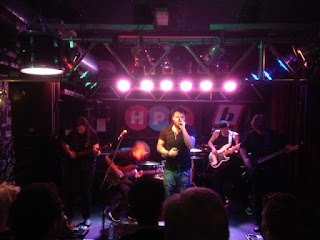 Next on were Icarius. For us this meant the band where Nick is singing. While this was the first time I saw him perform I did see his parents play many times in the past. Musicallity runs in the family obviously. While I thought we were going to see someone play who we knew when he was very young, I did not expect such a good band. Icarius blends several styles where a groove with three guitars is always present. At times you hear Disturbed, then Rage against the Machine, death double grunts and some old school heavy metal as well (luckily). One of their three guitarists stood out by some great solo's and bridges and Nick is a great performer with a huge range in vocals. This band were having a great time themselves it seemed and with the references mentioned above, has the ability to build a party. I guess we will see them again many more times, as this looked very promising. Waiting for their T-shirts to come out soon and hopefully something on CD for the generation of their parents. 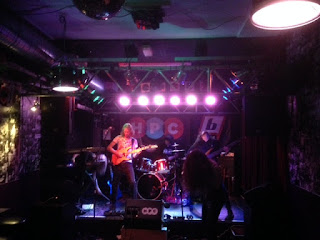 During the next break we learned that Wales kicked Belgium out of Euro 2016, which upped the atmosphere considerably. It was up to Resolve to close the evening in front of people already in a party mood by music and football. Unfortunately the many friends and family who came to see Icarius went home and left a fairly empty HPC Cafe. To make matters worse the speakers had some issues and the vocalist sung mainly from in front of the stage in order to hear herself. In my view the vocals were not loud enough in the mix either, staying somewhat covered below the music. Resolve is the best Prog metal band coming out of The Hague and I quite like their CD Wayward Sanctuary. Tonight was again a short set where only the CD was played. I always believe in one cover mixed in, for bands with not so many own songs yet. Like Musicon last year they decided differently and they were ready before we knew it. Instrumentally this band is extremely good, but I am still not sure about their vocalist. Then again I am suspicious to opinionate on this, as for female vocalists only Oceans of Slumber and Sinistro blew me away recently. Not coincidently both bands who stay away from fairytale like voices. The band will take a break now and we wait for new material. Lennert will be playing Progpower this year with TDW, but unfortunately on the Thursday night before I shall be in Baarlo.

While it turned out we did miss a great match on TV, the decison to g to HPC was the right one. Three good bands with lots of impressive guitar work passing by. As the bar stayed open without any hints of working you out the door, it suddenly was fairly late and we were full. Pity I shall still be on holidays during Submarine festival, as I would like to see Icarius again and finally see my flyering friend from Toner Low on stage.
Posted by erikprogtricolor at 12:27