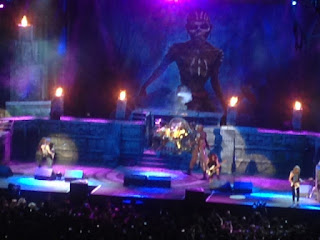 Seeing Iron Maiden in Sevilla, together with Tiago in a crowded Olympic Stadium really meant that nothing could go wrong. Still I forgot how huge Iron Maiden shows can be and I also do not remember ever sitting that high in front of a stage overlooking the slowly filling up arena below.
As this was Tiago's first ever major show I very much liked it to be Iron Maiden. There is always something going on and I got to hear some of his impressions. First he never saw so many black t-shirts together. I noticed that the fast majority were Iron Maiden shirts and any underground bands were not spotted by me (or maybe Axxis can be considered underground) Outside there were many foodstands and Tiago also noticed that beer is usually consumed by many in large quantities. When entering the stadium we decided to stay high seated (where you entered) and in front of the stage. We happily participated in an Icelandic Ahu, which was a huge succes when the stadium was still fairly empty and our uhhs echoed to the field. Later attempts failed mainly because of drunk foremen and noise all around. I also noticed many parents bringing children showing Iron Maiden provides great family entertainment. When support act the Raven Age came on it became obvious that the crowd was willing to participate and I was surprised by the big response to a band that I assume being unknown to all. This band played a kind of modern metal somewhere between Logan and Icarius and was indeed very easy to appreciate by first hearing. When they finished it turned out that many people arrived late and suddenly it was packed. The stage was at the Penalty area of the field and only the curve and seats behind were used. This created a nice triangle of arms and with the steep stadium it must be a great sight from the stage as well. The break was there to refresh with drinks, but that was not as easy as it sounds with too little tap capacity at hand. 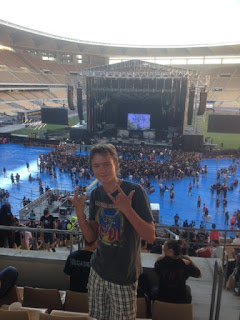 When the stage lights were lit and Doctor Doctor was coming out of the speakers we knew it would begin. To my surprise large parts of the crowd went already apeshit during the UFO song, so the atmosphere in the audience would definitely not be a problem. By pleasure also around us everyone was loud and there was no excuse for holding back. The set opened with the first two songs of The Book of Souls and later on four more would follow. I appreciate them playing these knew songs, since it respects new work and also brings us something new. Many people saw Maiden before and change is good. Not all agreed with this I noticed, as when the Trooper arrived the already great atmosphere went up a few notches more. Then we got the usual suspects with Children of the Damned and Powerslave maybe as surprises. Actually this show is alreading touring so long, that I have read too many reviews to get surprised. Some in the crowd did not read the spoilers which meant that after the surpising last two songs Blood Brothers and Wasted Years, many were expecting a real classic to close the evening, which was not to be. 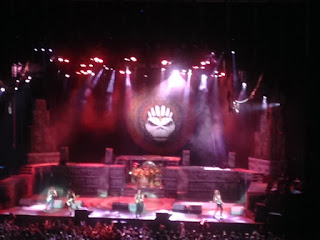 Two hours of iron Maiden flew by and how I loved being in the stadium next to Tiago and shouting along with some all time favorites. This was one evening to remember and hopefully for Tiago as well. He got the Spain Tour T-shirt which he shall wear with pride.
Posted by erikprogtricolor at 11:44