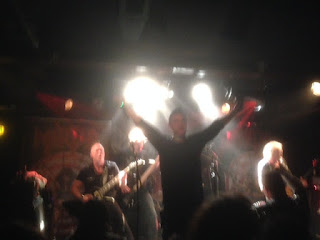 Thursday night and I had to pick up Josy at Schiphol at 23:30 hours. I could wait at home and watch the grass grow after crazy amounts of rain falling the last days. Or I could make a small detour and see two bands who always guarantee a great show. That choice did not take too long, so first time DB's in Utrecht for me it was. The place is easy to find and has lots of parking space around. As I was driving anyway this suited fine. Normally Raven and Martyr go down even better with a (Martyr?) beer in hand, but I do not know if the nearby small train station allows late returns by public transport. The main question in advance was be who would play Don't Need your Money. Last year in Musicon Raven did not include it in the set and Martyr did cover the same song on their last album. 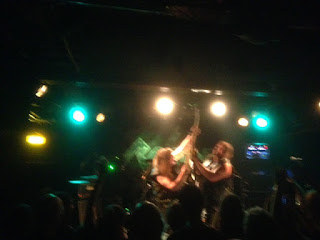 On the shows themselves I can be relatively short. Martyr is a party band, but as support somewhat milder on the inviting crowds on stage and running through the audience. The only problem for me with Martyr is that they can never beat the setting from last year's Schollenpop when they played at a beach before a fairly large crowd. Still their mix of new and older songs went down well. Raven was also not disappointing again. Yesterday I wondered why Mark Gallagher never headed guitar hero lists in the past. The ease with which he passed through their classics and filling up the set with solo's remains amazing. Raven know how to present a party and the atmosphere is good throughout. This show was within the week between Graspop and Dokkum Open Air, which they filled up with several Dutch clubshows. As I did have to keep an eye on the clock I stayed from Destroy All Monsters until Faster than the Speed of Light. After that I deceided to drive faster than the speed of light to Schiphol, where Josy just landed. Great Thursday evening by all means and Raven didn't need no rich fat daddy trying to change their lives.