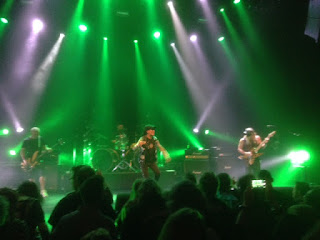 Loudness in Leiden in a not so full Gebr. de Nobel shows that I need to start with some Metal History. Recently Fortarock had Bbabymatel on the bill. People under 30 years might think that this is Japans best and biggest metal export product ever, but they are wrong. Admitted I never saw Babymetal playing live, but I saw a clip and think the cartoonlike schoolgirl vocals over modern metal are a joke and a gimmick that can never last. Also admitted I have been wrong many times before (Grunge, Nu-metal, Marilyn Manson). But coming back to Loudness they were one of the rising stars in the early eighties. The NWOBHM already fully exploded in our ears and Holland had many upcoming bands (Get the collection Dutch Steel for some Dutch Metal lessons). In Japan several bands also broke through with Bow Wow, Lazy, Earthshaker and leader of the pack Loudness. The band played melodic Heavy Metal sung in English with a very strong Japanese accent. Main man was and still is guitarist Akira Takasaki. Just to give an idea early 84 he was voted best guitarist in the 1983 poll in Aardschok. the world's leading metal magazine. This meant before heroes of that time Michael Schenker, Gary Moore, Ritchie Blackmore, YngwieMalmsteen and many others. Loudness would tour Europe several times and I believe the last time I saw them was in 1985 in Arena Rotterdam. Magchiel joined at the time and was very interested to see them play again. So Gebr. de Nobel it was. 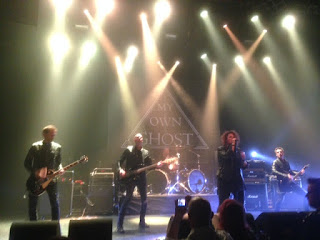 Before Loudness came on we had two supports. German band Grey Attack opened playing old school hard rock, with not so much going on really. The most remarkable about their show was the huge banner with a very Eddie alike drawing with grey hair and bold spots (Grey attack?). Next came My Own Ghost from Luxemburg. This band with a nice female vocalist played something close to Evanesence or Within Temptation. Not my thing really, but Magchiel liked them, got the Cd and gave them some free tips: Try smiling on stage and the similar leather jackets in summer made no point. I did see Martyr walking around during Loudness. In my view they would have fitted better to the music of Loudness and a party guaranteed. 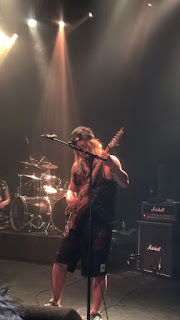 Crazy Nights meant Loudness was kicking off. Sound was good, Akira still in form and vocalist Minoru reminding us more and more of Klaus Meine. He managed to maintain a very strong accent after 35 years, but presented enthusiastically. Loudness was one of the bands that Hans had on LP, but I did go through their 80 albums on Youtube this week and noticed that I did recognize several songs. Highlight of the show came halfway when Loudness and Esper followed each other. Loudness showed to be still a very capable band with a guitarist extraordinaire. Akira is still one of the better guitarist mixing melody and heavyness. Time flew by and before we knew it Crazy Doctor and S.D.I. closed the show. Not leaving the stage and coming backfor an encore, just straight forward Heavy Metal and giving us a great evening. Hans was already on his way to Graspop, so I did recommend him not to miss this one. Once again the eighties ruled and Loudness is the best metal ever coming out of Japan.
Posted by erikprogtricolor at 12:11