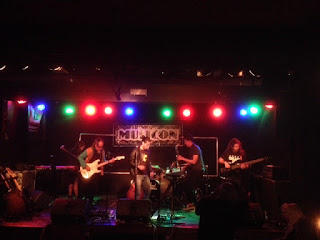 Anima Mundi were supposed to play London yesterday, but work permit issues made them cancel that show. Without getting overly political it makes you wonder if European bands playing Great Britain might face similar issues if Brexit shall be the case. If so the other way around might be applied as well and we shall loose interesting gigs. Basically this just proves my point that a referendum on something noone fully understands nor knows the consequences of is just irresponsible. Referenda are made for local decisions like building a new city hall versus investing more in hospitals and schools. International decisions should be left to voted politicians, who often have no clue either. But I drift away from Anima Mundi. As coincidence, which does not exist, had a late cancelation in Musicon as well, two hours of Cuban Progressive Rock came close to home. This is the weekend that Hans keeps me updated on progress on a muddy Graspop and Raven played Scum a place I have not been for many years which was once the second most famous metal club in Holland (after Dynamo). Pieter joining me to Musicon, the distance and thus beers made me choose for Anima Mundi and yet again I was not disappointed. 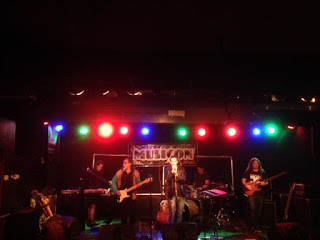 Anima Mundi are from Cuba, but played Holland already several times and this tour commemorates their 20 years of existence. To me they were unknown, but I did read several positive reviews on them in the past. In my Brazilian years I saw enough Latin American Progressive Rock bands to remember that they in general prefer the symphonic version with strong references to seventies Prog. Anima Mundi turned out to be not that different. All five showed to be masters on their instruments and the drummer occassionally played sax as well, while the vocalist had many shakeable instruments at his disposal. The songs were epic and mainly instrumental. In the beginning I feared for an overly serious evening as band and audience were all so focussed, that any noise might distract the spell. When during the second epic song someone applauded at what turned out to be not the end of that song, fans laughed and we were allowed to speak and breath again. Anima Mundi played two sets of each over an hour, with not so many songs in it. I do not recall any titles as all was new to me, but during the second set more uptempo parts passed by and the first one ended with a very long and impressive instrumental song. During the show I started liking the band more and more, but in the end I decided no to get their album. I think that on CD the power gets lost a bit and this band really comes alive on stage. While the world is complicating itself more and more today, The opening of Cuba is one of the positive recent developments. Now Anima Mundi  also put Cuba on the musical map of the world, looking forward to more of their visits.
Posted by erikprogtricolor at 09:44