"I did not know you were into Black Metal as well" Rene from Musicon told me in the break. I admitted he was right, but both timing and curiousity were just about right to quickly drop by Musicon for some live music. So between 17:00and 19:00  hours when the family was learning or reading and I could stay home killing time or see a Russian Black Metal band playing near home I choose the latter. My Black Metal roots are non exisent really as all Black Metal bands I have on CD, came into view after they moved away from pure Black Metal into more experimental territories. Examples of this: Enslaved, Ihsahn, Arcturus, Solefald, Ulver, Borknagar. Apart from that I can recommend the book Lords of Chaos (the bloody rise of the Satanic Metal Underground) to anyone with an interest in music. So apart from the occassional festival BM band this might have been my first Black Metal club show bringing the antropoligist in me back alive. 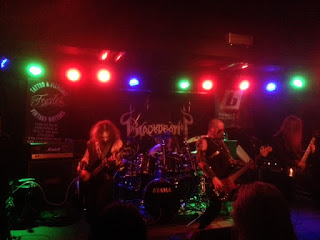 Arriving one hour late I missed opening band Black Command, so sorry for that. First thing that was clear that there was quite an audience for a Sunday show in Musicon. While not packed a decent turnout compared with other Sunday shows I attended last year. A second quick observation was the color Black being all around. While at all other metal genres (Djent!) the T-shirts vary in color nowadays, Black Metal still follows the original rules of one has to wear Black to a Heavy Metal show. When the for me first band BlackDeath from Russia started another surprise came to the front. Both band and audience show very little emotion or participation towards each other. While I can afford to stay nearer to the bar with a beer in my hand I still enjoy watching pits going crazy, and always see this as added appreciation of the bands. Well no such things for BlackDeath who bulldozered over us in a storm and kept on riffing for 45 minutes. No time wasted on speeches, showing of soloing or introductions all came down to the riffs and the typical BM Scream. I believe Blackdeath shriek in German, but could not define that. After 45 minutes the guitars were taken off and without much of a word the band were finished. 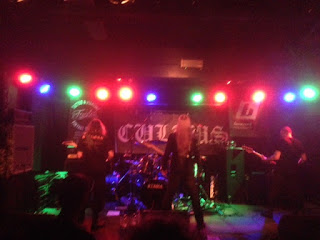 Next on were Dutch band Cultus. To my surpirse the same guitars and bass went on stage, only this time without the bullet belts. Second guitarist Blackdeath turned about to be the mainman and vocalist of Cultus. As a kind of jobrotation we got same people playing now a slghtly different style. I must admit being too little specialist in the genre to define the differences, but both vocals and riffing sounded somewhat lighter to me. Further pretty much all was the same. The audience did not suddenly shout along, or go maniacal. The band went through their songs untill they took after 45 minutes the guitars off. So that ended an afternoon blasting my ears. Actually I quite liked the whole show and mood. If this is to be repeated this close and comfortably timed I probably shall be back.. Still I did not turn into the biggest Black Metal fan and prefer those who developed onwards.
Posted by erikprogtricolor at 14:09