Wednesday evening and de Boerderij invited two bands from Pat Mastelotto to perform for us. While ORk already needs some refined taste for appreciation Komara turned out to be a bridge too far even for me. Komara is a trio playing well jazzy prog, where drums, trumpet, guitar and lots of effects give us slowly building songs turning into  heavy climax or not. Actually the first song I thought interesting still, just watching amazed at all that was going on and where these noises were coming from. After some 25minutes I got tired though and we took a short bar break to think over what was just on stage. Komara did have interesting T-shirts though (design by a guitarist of Tool) 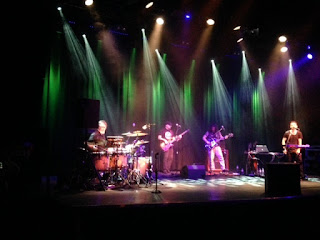 ORk are a different breed as they play actual songs with clear structures and apart from Mr. Mastelotto have on bass Colin Edwin from Porcupine Tree fame. With PT and KC members one would expect a bigger turnout, but tables in the hall showed us not that many were expected. When I saw that ORk would come to de Boerderij some months ago I checked them out on internet. Liking a lot what I heard I did order the CD and it goes to the list "should have / could have made my top 15 of 2015". Due to the dominant pulsing bass I do hear some Tool, mixed with prog on experimental level, while hidden in compact songs. Does not make much sense does it, but it works beautifully on CD and even better in the live setting. Actually next to the two solid performances of the big names the Italian half was at least as impressive. Lorenzo Fornasari not only showed a great vocal range he also played all  kinds of electronics with some weird stuff included (Did we see Sheldon on Theremin?). Guitarist Carmelo Pipitone was main responsible for the heavier parts, occassionally moving forward and go wild on stage. 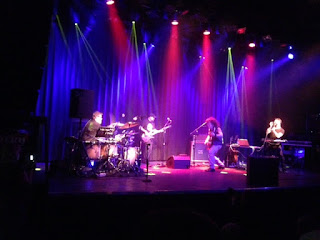 As they have only one album (Inflamed Rides) they played it in full I believe. A nice thing was that they did not follow the running order of the CD. This makes the show more surprising, but also harder to decorate if they played all. Highlights to me were the same as on the album: "No Need", "Dream of Black Dust" and "Funfair". Actually the rest did not come far behind. With this being their first show in Holland I was glad I made it and  who knows ORk one day get the recognition they deserve. They themselves already shared the recognition of the great place de Boerderij is calling it the best place in Europe to play. This coming from men with a background in King Crimson and Porcupine Tree might explain the second year second place of best venue in very British PROG magazine. Great show, early start early home, good mood, so no complaints apart from the T-shirt sizes available maybe. Hope they will release more albums and be back.