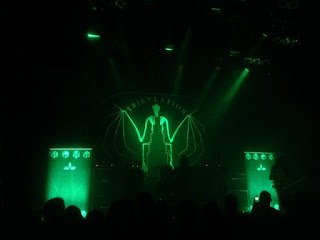 During PPE 2014 Andrew already tipped me on Tribulation with their weird image and great show. When they released their Children of the Night album last year it first passed me by. When some months ago they were announced for Gebr. de Nobel I checked them out on internet and decided I should see this band. Any decision on buying their album could be made after seeing them. Then last week Aardschok had them on number 2 on the best of 2015 poll of their writers. Animated I even bought a ticket in advance, but was unlucky in findng anyone joining me. So after going with a group of 15 to hear one of the best voices in metal (Damian Wilson) I now went alone to see a grunt. Probably more people went alone as the big hall was not really packed. Well homestayers missed out yet again. 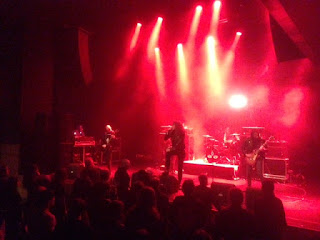 First we had two opening acts. The first one confused me in the beginning and at the end. The opening tune had some spoken word with a Brazilian asking me if I knew who he was. The band didn't look that Brazilian though and after two songs the vocalist cleared my doubts "We are Vampire from Sweden". They played Death Metal, but with the occasssional galloping double guitar and some heavy metal in the instrumental bits. I quite liked their show and thought it well entertaining. At the end they disappeared, but left a small light on and a drummer ascertaining the kit made it look as if they would come back, which they didn't.
Next on were Grave Pleasures. At the first tones of the vocalist I was hearing Psycho Killer by the Talking Heads. Gothic Rock it was and the voice took it down for me really. Sometimes he moved to a different tone and sounded Greenday/Offspring like. In the song Future Shock this worked best for me and we had a highlight of the show. Obviously not all could appreciate this slightly different style and also for me the hour took somewhat long. 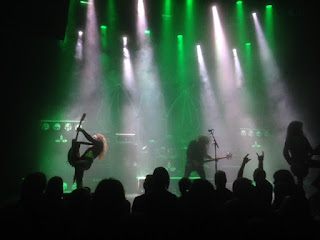 Then we waited for Tribualtion and apart from the music I was curious about their looks after warnings from Andrew and recently Jeffrey at Metalfan.nl. Opening instrumental the band came on looking different indeed. But the Goth/feminine looks of the guitarists were not noticed when they started running over the place, giving us a great show. First song with vocals was Melancholia their current single. What a great song that is and for me the mix of instruments and voice came over very well. Coming to the music I did not hear extreme metal really. This was a blend, but especially due to the great guitar work I heard Heavy Metal. I don't care about which boxes they fit in, Tribulation showed why they received so many great reviews on their last album. With an energetic live show to match this could well be a band that grows out to become a big name on summer festivals. Sweden did it again and is leading the way in both old school heavy metal as progressive extreme metal. No doubt this band will return many times and I shall keep follwoing them closely and of course the CD is playing now.
Posted by erikprogtricolor at 10:53