When it is dark winter days, but not really. What better to do than to play loads of music and watch a great Banger Films documentary on the biggest Heavy Metal band in the World Iron Maiden. While seeing this documentary I thought I just needed to comment on the question who are the greatest Heavy Metal band in the world? Nowadays it seems to be the norm to consider Metallica to be that. Great as they may be, let me give you some facts and numbers to set this right.

Metallica released three Classic albums (KtA, RtL MoP) and those were followed by two still very good albums, although not complete top level releaes (JfA and Black) Since 1991 (!) Metallica has not released any album that is even good, nor anything worth revisiting.

Iron Maiden released 7! Classic albums from ther debut until Seventh Son. Hereafter several good albums were released. I did not put the Book of Souls in my 2015 year list, but yes it is again a very good album. Similar to all post 88 albums, they might not be instant Classics but contain very good music.

This documentary shows Iron Maiden flying Ed Force One all over the world in a crazy tour with huge crowds on various continents. The joy they bring to the people is unmatched and after seeing this film I am looking forward to seeing Maiden again this summer (probably Graspop) With many great new songs to blend into the setlist a highlight of Live 2016 guaranteed. And then there is Sam Dunn from Banger films, who already brought us so many good movies (Global Metal, Rush). Staying off camera mostly it is all about the band and what comes together with a tour this size. For those unknown to his work, check out the Heavy Metal tree with some 15 (?) documentaries on all subgenres of our beloved music.

So when it rains outside and the weather is appalling, try to watch this. It made my day. I even went back in my photograph files from work to find Ed Force One, So here it is on a cloudy London morning just before the 2008 tour. 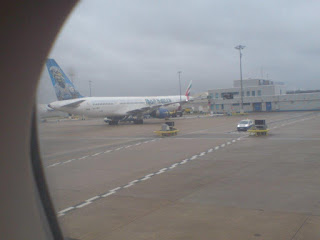