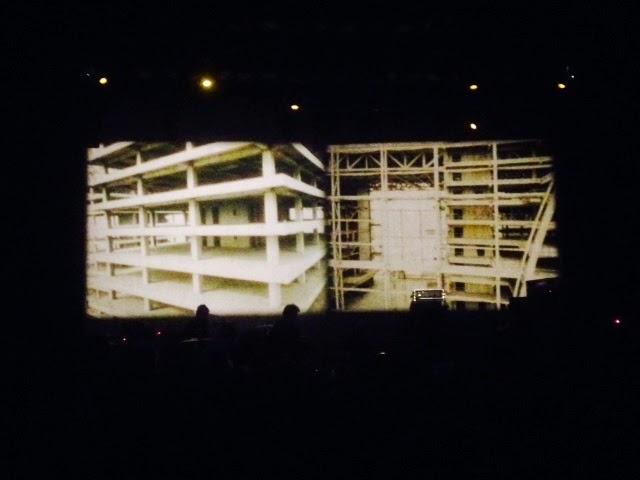 Weird, Strange, slightly abnormal. An evening with Godspeed You! Black Emperor and nothing was as I expected it to be. Some 15 years ago I bought their double album Lift your skinny fists like antennas to heaven. This showed an interesting build up of many instruments from slow to very heavy and than some rollercoasters along the way. Never seeing them playing live I was pleasantly surprised to see some weeks ago a poster in town for Rewire Festival (?) announcing them playing het Paard on 1 May. An evening of Post rock also sounded attracting to Roberto who had the same album and was curious as well.

And then it was yesterday. First we got treated on a support act which was easily the worst show I have ever seen. A box on a stage with some arms sticking out behind it and an ever louder getting zoom buzz or whatever. Looking to Robert in total amazement noting that some people actually watched the stage as if this was a normal show. Well way above our heads we decided like many others to hide in the bar downstars and get a beer. The soundman first walked the hall checking the sound and when I complimented him that he nailed it just fine a blank stare came back as seriousness ruled over humor this first of May.

Then came the band and to state a storming entrance would be exagerated. Actually one by one the 8 GY!BE members came to the stage and started tuning their instruments which continued into the first song. A song takes normally some 20 minutes or more so we had a lot of time to get into the mood. Some blurred screen shots passed by later turning into construction sites and fast moving numbers. This all participated in getting you into a state of floating around. I was at times floating in space indeed, while at other times I got bored and thoughts drifted away. The next five songs would basically continue the same, which meant a full two hours of show. With two drums, two basses three guitars and one violin there was space to create a lot of noise and so they did. When the  groove took over it actually was pretty great and people started sort of dancing. Mentioning the people, I got nothing of the evening as such and also failed to understand the crowd. All ages and types were present, but reacting to an act like this seemed kind of hard. A Band who manages to have no microphone on stage and not say one word to their audience creates some distance which for me was too hard to bridge. Maybe the fact that the band was mainly sitting on chairs and two guitarists were showing their backs to the audience did help little either. Also the pictures on the background got me confused. There must be so much they want to tell us with the images, but most of the time I had no clue what it was that I should pick up. The scrap yard reminded me of the beautiful Brazilian documentary Wasteland while at other moments the trainride bored me as daily train commuter.

So I have seen Godspeed You! Black Emperor now. Was it impressive? Definitely, was it entertaining? not really, would I go and see them again? probably not. Most striking to me was that suddenly halfway I though about The Dirt, the famous Motley Crue Biography. Being probably 100% their opposites I felt that straight forward Metal is more me than this too hard to grap outfits. Strange!
Posted by erikprogtricolor at 10:55