So there is a band flying over from not just around the corner: Australia to play three shows in Europe. Then they learn that in Holland the so called prog loving community gives a massive not at home call by not showing up which made them move the show from main stage to the bar stage. Then given their lyrics they all have a pretty miserable lovelife as well and they open the evening with the not so uplifting "And I wait for my World to End". Well did I get prepared for a grim depressive evening of prog rock in intimate atmosphere. 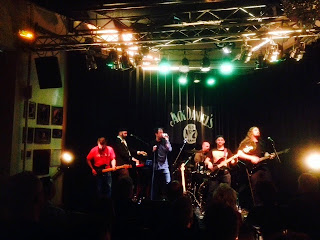 Anubis are not the complaining kind  really and they made the best of the evening and then some more. After a two hour show they begged programmers if they could give us one more song, which would be another epic in six parts. Extremely thankful for the receipt they received in Heidelberg first and now at de Boerderij they really gave it all they got and showed to be the next big thing, if only more people would know of them. So let me start with a short introduction on this great band. In 2009 they launched their first CD 230503, which made a small impact in progland. Mainly epic songs with some eighties touch and beautiful guitars  it became clear to me that it is a pity they hail from the other end of the world which would make live shows a slim possibility over here. Their next two albums 2011 A Tower of Silence and 2014 Hitchhiking to Byzantium only reinforced their status as one of the new powers in prog rock. Looking at new bands they remind me of Big Big Train and Cosmograf in the way they play epic progressive rock with a major role for soloing guitars. Basically all the so called Pink Floyd fans who bought their rather average last album or go and see en masse PF cover bands should check out Anubis and find out there is a future in prog rock as long as it is supported by fans. As I seemed to be more upset by the lack of audience than the band themselves some words on the show as well. 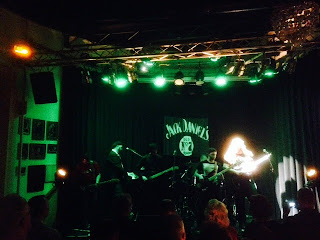 As from the opening world ending song it became clear that Anubis can do justice to their CD's on stage. We got two hours of highlights from all three albums, which made a big impact on those who were present. As I do not remember the full setlist I know that they did play my probable favorite dark ballad from them "Dead Trees". The most beautiful guitar solo of the evening came at the end of "Silent Wondering Ghosts" which just went on and on and on ending in a deserved big cheer from the audience. Building up to some heavier songs an epic highlight was "Disinfected and Abused" from their debut, including some very heavy headbanging parts from Douglas on guitars. Some ProgPower veterans told me they came to see him especially as last year he spend part of his honeymoon in Castle de Berckt visiting Progpower. Talking about heart in the right place. Over the evening it became clear that this is a very good, sympathetic and success deserving band. The organizers of Prog the Castle made their trip to Europe possible and were present this evening as well. I do hope they can make it again and as all agreed next time they play the main stage.