Doomsday Celebration was the actual name of yesterday's show, where ten bands would play from 19:00-02:00 over the two halls in beautifull Gebr. de Nobel. I basically came to see Hell, who were announced first and made me hope on some more NWOBHM or Dutch Metal (the 80's compilation) bands to join them. The festival was however looking at the more extreme spectrum so Black and Death metal came by in several forms. Most bands were Dutch and unknown to me, so I decided to see the ones playing before headliner Hell would hit the stage between 22:00 and 23:30 and then try to catch a train home. So I was introduced to Countess (Black metal vocals, over some slow NWOBHM ish metal) Soulburn (Fast and furious, good live show) Heretic (Sleaze, Venom, Punky I would have loved the US Heretic of Mike Howe/Metal Church vocalist fame much better). 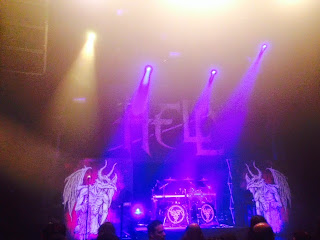 As mentioned I came to see Hell. Two years ago they headlined NWOBHM day at the one-time-only R-Mine festival in Belgium and I was blown away by the great live show for such a relative small band. Memories of Maiden or Dio in the eighties came back. This time it would be not much different as they hit the stage in style and gave us so much more of a show than you used to see nowadays. Apart from the show, the music is top-notch as well. Heavy Metal as it was originally meant to be with double guitars, heavy bass, spooky key intro's and solid drums. While musically he might not be the man behind the band on stage the attention is all the time drawn to vocalist David Bower. His outfits, his expression and very dramatic presentation make Hell Live a must see spectacle. 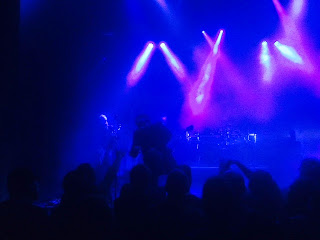 The show it self gave a great overview of both CD's opening with The Age of Nefarious, before being welcomed to Hell in Let Battle Commence. As this was Doomsday problems were bound to appear and some technical hickups came by. During Plague and Fyre the tape with No,no,no did not roll and the audience was not loud enough as a substitute. When playing "Something Wicked This Way Comes' the fire alarm went off and the hall lights automatically went on. While the band played on only the bass good be heard. Later I learned this happened before in this hall and was caused by smoke effects. As the band at first did not notice they continued playing and after a minute or so the sound came back and off went the lights. These minor interruptions did not make an impact on the band and they just kept going. With Priests, goatlegs and horns, bloodwhipping, lots of smoke and the 666 flag on stage there never was a dull moment as time flew by. For me Hell proved again to be one of the better live bands around nowadays, who take care of presenting their audience a show in great eighties style. I wonder if on CD they can still surprise, but seeing them every now and then live shall definitely never become boring. For now their anthem "Save Us From Those Who Would Save Us" shall be in my head some time.