Anihilated, The Outside and Infantry - Musicon Den Haag, 10 May 2015 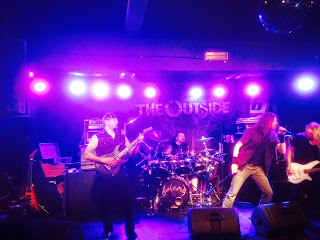 Some bands just passed my blind corner and so it can be that Anihilated formed in 1981 was unknown to me until recently. In this case until last year when they also played Musicon and I unfortunately could not make it. This time even being a Sunday Night I knew I should not miss out again. After all Anihilated is one of Britain's greatest Thrash Metal bands still around. To start the evening we had two support acts. Dutch band Infantry played a thrashy death metal and sounded OK. Main points they gained by later showing they were amongst the most loyal Anihilated fans, moshing and shouting in front of the stage. I have seen many support bands with less respect and admiration towards their headliner. Hereafter we got German/Chilean band The Outside from Berlin. Announced as more prog influenced I was pretty curious about their live performance. With some great instrumental parts I was in general not blown away by the songs, that did not stick in the head. Good band, but not making me go after recorded music. 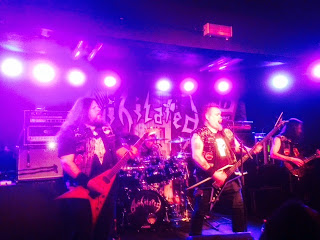 And then came Anihilated themselves who took about 15 seconds to show us what difference stage presence can make. They sucked you into their show and basically bulldozered all on their way flat out leaving you grasping for air. What a great live band this is, and how strange I never read about them some 25-30 years ago. Having a career in the eighties and already three albums released after their come back they had plenty of material to choose from. Apart from some clips I saw through internet all was new to me, but songs did stuck immediately. In the good Thrash tradition of old, they played fast and short. This is not a show for two and a half hours, but one hour giving it all gained them in me at least one new fan. Originally coming from the punk scene, they have some well thought lyrics as well, which I now can grasp better reading along their last CD which I got yesterday. While at the beginning of the evening Musicon seemed pretty empty I had the impression it filled up lots more when Anihilated hit the stage and the atmosphere was great. Seeing a no-nonsense band giving their best and enjoying themselves is just contagious and easily gained them appreciation. For those who have a small interest in Thrash metal the below cover should be in your view as many of the Big 4 don't make them that thrashy any longer. Anti Social Engineering! 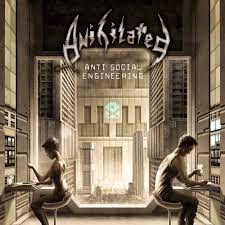