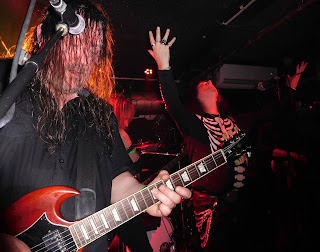 15 February and I am going to see my first show of the year, means that something must have been wrong. As usual not one specific point to blame but a mix of rather poor programming in January, a devastating worktrip and some returning colds. This night was not to miss though as the best Heavy Metal package this winter was brought by Mario to Tilburg. Making up a good combination I knew I would enjoy all three bands, so an early train was needed and the Cruel Winter tour could hit us. 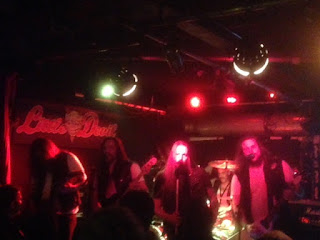 Arriving in Little Devil it was a beer at the bar and straight on into the hall where I was warmly greeted by Henrik and Dejan of Screamer. Last year I had the pleasure of hosting Screamer when they opened for Night Demon in Musicon and any band that once stayed at my place I follow closely and try to see again when they are in the country. Apart from it being nice seeing them again it was also good to see the band on stage again. I know more of their music now and can say that this show was therefore even better than what they brought last year in Musicon. This was not just my opinion as Theo and Alex agreed to that as well. So we were warmed up well from Demon Rider all the way through Monte Carlo Nights to new song Highway of Heroes. Even being sold out and crammed this would be a good evening in Little Devil. 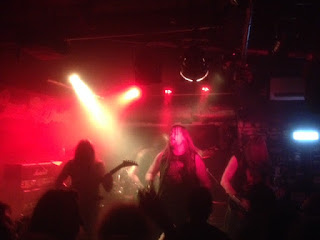 RAM were on next. One year and two nights ago I saw them last when they headlined last year's best Heavy Metal package of the winter (with Trial and Portrait !!) They started to me somewhat in a blur of songs. No stops for introductions and a constant flow of metal.For those not knowing RAM, if you are into Priest you probably like RAM. Further down the set it seemed to me they took time to let the music and the audience breathe a bit. For me that worked wonders as I liked they second half much better. As I only own one of their CD's I did not know songtitles, but it was good. 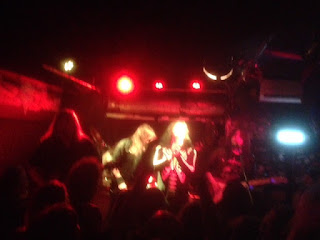 It was up to Satan to show their Swedish openers what a metal show was all about since the early eighties. Anyone who read the book "No Sleep till Saltburn" (obligatory to any NWOBHM fan)  knows that some 36 years ago Satan were in Holland bigger than in their homeland. Looking around tonight some of the oldies were still there to relive our past in style. Last time I saw Satan was in Leiden where they were part of a strange package with Gnaw Their Tongues and Batushka playing before them. Tonight was a much better fitting package and possibly due to that I liked this show also even better. Satan is one of those bands who came back releasing new albums over the last decade and I think it is safe to say that all three recent studio albums can stand proudly next to their classic album Court in the Act. The set contained a good crossing of their Classic debut and more recent work. I wondered why I did not include Cruel Magic on my list of best albums 2018, as all songs of that album were massive killers. This was just sheer class with the remarkable voice of Brian Ross in good form and the always upbeat guitar tandem Tippins/Ramsey not missing one note.
So the gig year opened for me in great fashion and today there is more. Thanks to Mario for organizing this one and Frank for the real picture on the top.
Posted by erikprogtricolor at 10:06