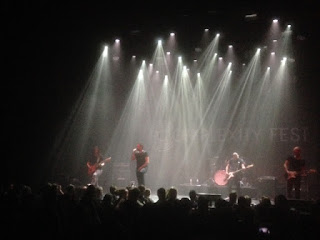 Complexity Fest held its 4th edition and again we would be treated on a range of technical, forward thinking and as the name says complex music. It is a sort of offspring of ProgPower, but then for the younger more trend-sensitive and modern lovers. This meant that while training down alone I would bump into PPE friends throughout the day. I guess overall the organization must have been pleased with the turnout as it looked rather busy even in the main hall. It was going to be a long day and unfortunately I soon found that a pain in the back earlier this week might return if you are still recovering from Satan the night before and having eight hours on your feet. So at times I adjusted my views to physical state, but managed to fill the day with many highlights. 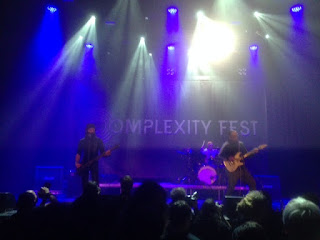 Upon arrival I did see the last three minutes of Piniol in the main hall, a French collective showing two drums, two basses, two guitars and one keyboard in the middle. This was building nicely to one heavy banging climax. Later on I heard that some people thought the full show a bit difficult. When the main hall was swapping the stage, the smaller hall and cafe stage would both hold a band. This meant at times busy places. The first session held 22 in the second hall, which were not having a large impact on me trying a bit too hard. The cafe was packed and spit out the dangerous sound of post rock. I say dangerous as falling asleep is a risk if not played well. This was too packed for me to enter and judge. So on to the main hall it was waiting for a band I found interesting on pre-festival internet search. Four Stroke Baron. This band mixes eighties new wave with progressive metal building on a very heavy bass and hard hitting drums When they started their set it soon became clear that for me we had a first highlight of the day.This was catchy dancing metal and I loved it live and now playing their CD also at home it works. Halfway the set they stated coming from Reno Nevada. Well I told them later on they can fool whoever they like, but if your vocalist sounds like a bastard son of Simon Le Bon and that bloke from Human League you are as British as can be. But they lifted my spirits and mood and showed why attending a festival like this is worthwhile. You discover new bands that are surprisingly nice. 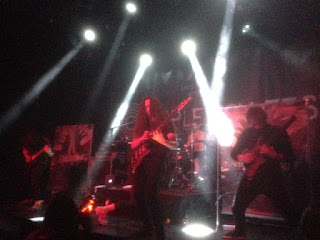 And then for something completely different as Irreversible Mechanism bringing us some technical Death Metal from Minsk of all places. Now I do like my tech death, but this band had one factor pretty much spoiling the fun for me. The vocalist not only holding the mic too far from his mouth to hear anything, he was to me just plain weird. First he looked like one of Tiago's school class mates. No issue with that, but in his pink trainers and black clothing jump up and down the stage doing some sort of Tech Death aerobics, just distracted the hell out of their show. So after some good 25 minutes I left to try and see a bit of Lotus Eaters in the bar stage, but ran into a full house again. So time to eat became the option. Now Complexity has a fairly high hipster factor, so my food was a vegan burger, admitted it tasted very good. Back to the man hall to see Klone. Now this band already played at ProgPower as well and came closest to traditional melodic progmetal. Only point is that they are rather stubborn sticking to the more mellow side of music. So there was for me some lack of energy for a full hour set. 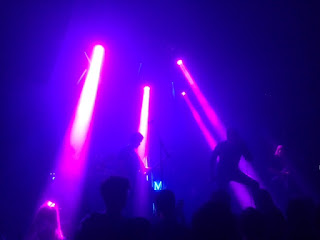 Now with an early departure at Klone I could pick a good spot in the small hall for upcoming band Mol. This Danish outfit call their music Shoegaze metal, but it tends pretty much towards Black Metal influences. It seems they played Holland before and are gaining some name for themselves.
Well after this show you can count me in on their fans and followers. What a total killer show, basically blasting all bands of the day from the stage with this level of energy. Great songs, calmer intermezzos going into full blasts and just the right performance. I hope the kid from Minsk was watching, as this is how a vocalists controls a crowd. For me there was nothing not to love about this gig, unfortunately I passed their merch table too late and CD's were sold out already. So after Four Stroke Baron and Mol I had two winners now and then to think they would originally play at the same time. So thank you David Maxim Micic for pulling out injured.And then as if the hype was not high enough Conjurer was destroying the main hall. This is one heavy riff machine and when I just was in the big man on guitars decided to shout/sing to the hall without using any mic. Well that was an impressive voice losing act. This show was best described as bulldozering over us like there is no tomorrow. Only question was on the football scarf at the drums, I guess it was Aston Villa, and yes those things do matter.What a heavy feast and it soon turned out the day got better and better. 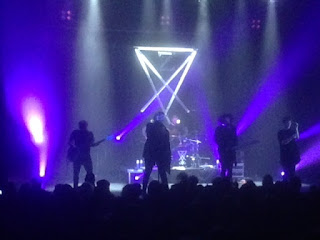 After so much good music sitting was welcome and I skipped the next bands waiting now high in the hall for The Ocean. Turns out that waiting was taken very serious as The Ocean had some problems with their instruments and started some 20 minutes late. last year I saw them in Eindhoven and was not overly impressed. Hanging at the balcony this evening I liked their show much better and actually it got better throughout the set. Next month they play The Hague, so I probably attend that home match. Hereafter there was a choice to be made as both Letters From The Colony and the Shining could be interesting. I started at the cafe and felt that LFTC probably musically was more my thing. Yet as they can be seen again next month as well I moved on to the second hall where The Shining were giving a show. Maybe a bit slick at times we did get a show indeed and they managed to get the hall jumping up and down on command. Amusing it was even if I only saw a small part of the stage in a crammed hall. And then my closing set would come and Zeal + Ardor were one of the main reasons I trained down to Haarlem. I do have their last CD Stranger Fruit and hoped for a good show. Well again no complaints here as they surpassed my expectations. Helped out by additional vocalists on stage for the heavy choirs this was again a heavy monster of a show. Zeal + Ardor mix Black Metal with some sort negro spirituals from the south of the US. I wonder how this will work if they release six albums in ten years, but for now it worked fine and did impress the majority of the audience. They called themselves the less complex band of Complexity Fest, but they did earn the largest crowd reaction. So another highlight to close the day fro me and next year I'm probably back.