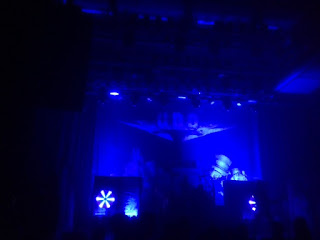 The question this evening was: "Shall I wait at home until 23:45 to pick up Josie at Schiphol, or shall I attend a show at a local venue in the meantime?" Well that was not a hard question, so I went off to het Paard, our biggest local venue with hardly anything good on stage throughout the year. U.D.O. is of course Udo Dirkscneider the ex-voice of Accept. If you are into going back into time you should visit the shows he does under the Dirkschneider band name. This would be an evening of U.D.O. music. I can fully understand that, as he released meanwhile many more albums under the name U.D.O.. At the same time, when you attract an older audience and you announce not playing any hits that everybody knows from their youth, you tend to lose some people. Conclusion het Paard was not crammed with people. 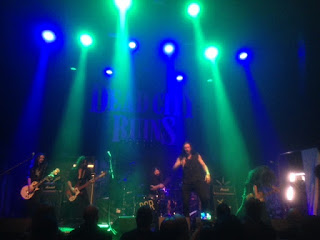 First band of the evening would be Dead City Ruins from Australia. I saw them a few years ago with Dead Lord and quite liked their seventies based hard rock. At times you hear Thin Lizzy, than there is some Led Zep or even Aerosmith at times. Good voice, good guitars nice live show. Nothing overly shocking though so the most remarkable moment came when they announced their last song and we were supposed to summon the Devil. Well Lucifer struck immediately as the smoke alarm went off and we were asked to leave the hall. False alarm it was, but it killed their end of set. At least they have a story to tell on this I guess not overly exciting evening to them. 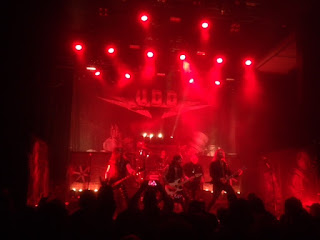 U.D.O. came on just before nine and he was walking with crutches, or better one only. I remember reading about his health and doctors recommending him to cancel this tour. Well he did not and would ask us to clap along with one crutch hitting the air. This was the Steel factory tour named after his last album and the stage looked nice. Actually one of the T-shirts looked even better. Visiting many steel factories for work over the years it looked appealing, yet 45 Euro for a T-shirt of a band I am hardly a die-hard fan of was a bit much. On the music I have to explain that I have none of his CD's under the U.D.O. name. I do know all his work with Accept which would be skipped altogether this evening. Still that turned out no problem as U.D.O plays in very similar style as the old Accept. This means rockin' on, mostly in mid-tempo and halfway the song you can already sing along with the chorus. In the case of Metal Machine and Vendetta it took some 10 second only before you could join in.  Speaking about singing not all our vocal heroes from teh early eighties still sound this powerful today as Udo does.So this basically is straight forward party metal with the only goal to entertain. And that is exactly what they did. So I had a good evening with Peter and Alex even not drinking on this alcoholic tunes. My only comment would be in the closing song. While the regular set closed strong and the first encore ended with the best song of the evening Animal House the very last song was to me one of the weakest of the night. Well you can't win them all and when the lights went on and The Show Must Go On was played (in respect to the crutches!?!) I did rush home by bicycle to pick up the car and drive to Schiphol. Final choice of the day was in the mail as both new albums by Dream Theater and Last in Line were delivered. Last in Line won and joined me on my trip.
Posted by erikprogtricolor at 12:42