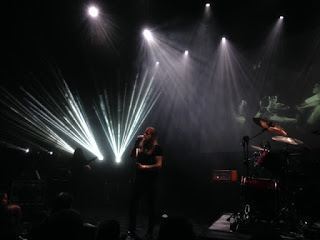 Into Darkness is holding it's fifth version and I made my debut their, The reason for that is Bell Witch. Last year they released the one song 83 minute album Mirror Reaper and this time they would play it in full accompanied by a film that was made for this song. Now Into Darkness had 11 bands on, so was there anything more to my liking? Turned out a yes. Yet with Leeuwarden being crazy far away for such a small country I was not going to stay until the end. Fitness would decide how long I would last, after all I was in recovering mode still from the Absolva gig in Leiden. In order to relax I decided for the train and the 5.5 hour drive up and down gave me the opportunity to read Chris Lammiman's book "A View from Ground Zero". This book is a fan's (and a bit more) report on Twisted Illusion's first UK tour last winter. Interesting enough he also writes about long train journeys to gigs so I could relate and can recommend the book. But I came for Darkness and found it in de Neushoorn. 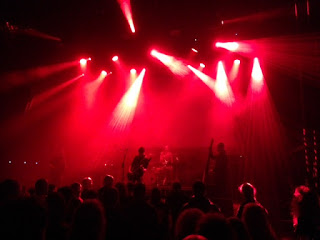 I arrived at de Neushoorn when Zhrine had just started. This was no coincidence as with limited train flexibility I internet researched to find which band I would like to see first. Zhrine sounded interesting and without me knowing yet, they became the surprise of the day. Kind of hard to describe their music I liked the instrumental parts where at times guitars and electric contrabass were played by a bow at calm intermezzos. This only to erupt into wild outbursts of heaviness. These guys seem to come from Iceland and like their football team you wonder how such a small population can give us so much talent. Looking like an extreme metal version of Leprous in their shirts and fashionable haircuts this band surprised me very positively and I did get their CD later on. Next band in the smaller Arena hall were Au-Dessus from Lithuania. A few years ago we made a holiday road-trip to all Nordic Capitals. Pity that after leaving Lithuania only in Latvia I got the brilliant idea of looking for local metal bands in CD shops. In Lithuania I might have ran into these guys. Starting with four black hooded guys on stage playing rather straight forward black metal their second song showed some variation and actually from there the playing stayed at high level and songs would bring some interesting twists. Decent show. 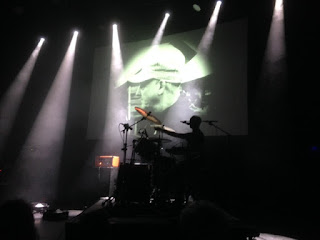 Still I left in time for the main hall with Jeffrey and Ramona as we all came specifically to see what Bell Witch would bring. At any metal event I shall run into PPE friends, which is a comforting thought really when sometimes my friends don't get a genre. Standing close to the stage the sound check did suddenly ,move into Mirror Reaper when the movie started. Now I saw earlier this year Bell Witch play in Patronaat, when only the first CD was played. At the time it was new and I was blown away by the fact that only  a bassist and drummer make all these soundscapes. This late afternoon we had the extra of an added vocalist for part 2 and a black and white movie. Starting with the movie I was hoping for something more really. Lots of repetitions and lots of death and some rebirth or new life. When the guy from Le Grande Boeuf passed by I realized I was starting to feel hungry as well. So the music should do it again and impressive is the word. The music Bell Witch play is doom of the slow kind. Actually so slow that drums and bass had to look at each other many times making sure they hit the same slow notes. This 83 minute song does so go against any trend of today's youth that it deserves respect for that alone. Then again I must admit that for me 83 minutes also was a bit much. At times there were moments that not much happened over five minutes and thoughts started drifting away. Luckily the bass would bring me back in such cases. The bass gave us bits of melodies, while the drums took care of the tempo, which was very slow throughout. When after some 50 minutes the extra vocalist came on we won some interest and the very end where he sung over a relative faster part turned the high of the song.  So I was not as overwhelmed as I was in Haarlem. I did have the feeling at times that if you would present these ideas of 83 minutes to a band like Iron Reagan they would put them all in a thrash song of 4 minutes max. Still the total experience even being an exercise in patience was one to remember. Curious what they bring us next. 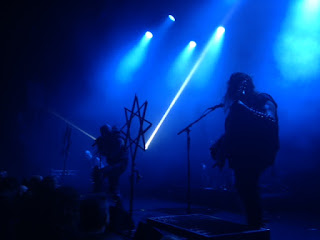 Now after the slow song we could do with some speed and Sun of the Sleepless brought this partially. My pre-festival internet search made this band one to look at, especially when singing in German (I mean if the vocalist barks at you, what better language than German to do so) Live they turned a bit less interesting to me. The speed and some banging were nice, but at the clean vocal parts it sounded all a bit too massive for this one guy to produce. So after a few songs I left for the corridors where next to merch stands now also the local Chinese put up some food for decent prices. So enjoying my Spicy chicken and cashew rice dish we missed also the start of Nordjevel. Well we could hear them from the tables and banks that were provided for those eating at the spacey corridors. Now I saw Nordjevel earlier this year opening for Hate in Musicon. Well that was at a small stage. This time they brought the whole lot and what I saw was more about the whole experience than about the songs. Actually they all tried to stay in speed with the continuing double bass drums. I can see why some people totally liked this and also understand why others could not do all that much with it. 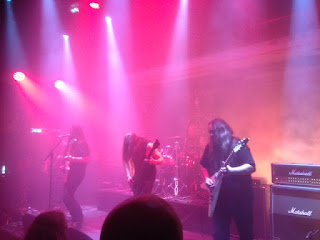 Meanwhile I already decided that I would take a train home, getting me there not overly late. Yet before leaving I wanted to see Mournful Congregation, These Australians play Funeral Doom and would be a nice break from the Black Metal we just witnessed. Well this was a second surprising highlight of the day to me, even if not seeing them fully until the end. What made them so good to me was the fact that they hold three guitars. The lead guitarist on his flying V is basically giving us melodic slow solo's for at least 75% of the time. As he was very clear in the mix, this gave the songs a brilliant edge. If you want to get into the genre of Funeral Doom, this might be the best band to get into it, as I thought them very accessible. Well accessible or not I left for my train on time. Today Mournful Congregation play Belgium. This together with Bell With, Marche Funebre (a Highlight at DDD last week) and Green Carnation. I won't drive down, but can recommend. Into Darkness turned into an interesting event, which might see me back next year depending on line-up. De Neushoorn was a first to me and turned out a very well organized venue, with big thumps up for the food and seating arrangements. Thank you for the Darkness.