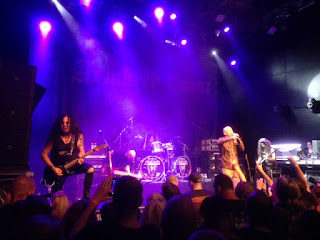 2018 was another year, where basically every show was a hit. Never did I feel close to thinking:  I might as well have stayed at home. In total I attended less gigs than in 2017, but quality was as good and ranking became this complicated task again. This taking into account the many great shows I could not attend.When I did a first shortlist I already arrived well over 25, so I included one harsh rule. Bands I saw in 2017 as well in similar setup were leaving the list. This meant no place for top class gigs by Michael Schenker, Saxon, Solitary, Absolva, Beyond Creation, Night Demon and Raven. Next I critically went through the festivals attended and noticed I did not have one outstanding set at PPE or DMF. Well I did, but skipped them from the list as well. This enabled me to finally reduce the number to 18. This lists included nostalgia as always, new discoveries and total surprises in genres that are not my absolute favorites. Starting at 18 let the countdown begin.

18: Hypnos - Musicon 13 May
Attending a Sunday matinee show of a band I never heard of before and then get blown away by this Czech Death Metal combo. Good show, good shirt, and a nice surprise.

16: Transport League - Musicon 8 May
This was an a-typical Tuesday night in Musicon. Packed as if it was a weekend, these Swedes did give a remarkable show of heavy stoner rock. Killers on stage this band.

15: Anvil - Nobel 1 February
Anvil kicking off their European tour in Leiden. I was not expecting such a full house, nor was the band, obviously pleased with the warm welcome. Good movies do matter it seemed.Metal on Metal.

14: Sorcerer - Dynamo 15 November
On the night Slayer said goodbye to Holland, Sorcerer gave the lovers of Heavy doom metal a night to remember in Dynamo.

13: Horisont - 't Beest 12 May
Retro rock is in fashion nowadays, with the seventies returning on all fronts. Forget Greta van Vliet as these guys are so much better and original. Mixing Heep and Purple with this Scandinavian touch to complete the show.

12: The Contortionist - Patronaat 26 June
My favorite Djent band. On CD they mellowed down and left the screams behind. On stage these numbers gained a lot of impact to me. I was expecting them to play the main hall, but in the cafe stage they obviously still need to be discovered by many.

11: Amulet / Scavenger - Little Devil 17 June
Similar to nr 17 two bands playing old school Heavy Metal. Amulet saying goodbye to their vocalist on his last show, while Scavenger welcomed their new female vocalist. The Hangman scene shall be remembered by all those present.

10: Fish - The Queen's Hall 22 September
Seeing Fish in his hometown, was a very welcome surprise to me when visiting Edinburgh with the family. Voice good, band more or less OK. Still hearing the Clutching at straws in full was a highlight this year.

9: Bell Witch - Patronaat 1 April
I did see this band twice this year. This was the first time which took me by surprise. A duo on bass and drums bringing all this. The full album version later on in Leeuwarden  with B/W movie was in fact a bit too much with one 84 minute song. The first half only was just brilliant.

8: Ozzy - Altice Arena 2 July
My annual trip abroad to an old-school show with Magchiel became a tradition and a success. Warming up by Priest helped, but Ozzy won the night for me. I believe for the first time since MOR 1986 I saw Ozzy live and he was in good form and so was the band. With all songs you can sing along, so a party it was.

7: While Heaven Wept - Baroeg 25 November
While Heaven Wept saying goodbye and we can be sad indeed. What a complete killer of a show and how often do you see Baroeg singing along with the band this loud? never. This band playing Heavy Metal doom shall be missed indeed, but what a farewell they presented.

6: Mearfest - Farnham Royal Village Hall 2 June
Now I know Mearfest is not a band, but this was a special day in total. The afternoon in the pub, made me even like the cover bands with good British sense of humor. Than the evening had Trespass, Bandolier (with original Budgie drummer as well) and Satan's Empire. An evening of celebrating NWOBHM and impossible to choose one favorite moment. Brian and Claire pulled of a special day again.

5: Anubis - 't Blok 8 July
Anubis proudly waving the flag of Prog Rock for me. The night before holding their own amongst three heavier progmetal bands this afternoon was one they remember as well (with CD release) How often do you get underground bands playing a three hour !! set for you. With the amount of epics, not even that many songs, but so good played this band showed and shared their love of music.

4: Vice - Lottenhutte 7 April
A Tribute to Wizz was the festival and after Twisted Illusion had to cancel I drove down to see this lot. Well that was very worthy as hardly will you get so many guitar solo's thrown at you in a 45 minute set. Their album was good, their live show excellent. After three Belgian tours, it's about time to drive on north to Holland.

3: Q5 - Little Devil 31 August
Q5 the band behind Steel the Light came down to Holland for the first time. The eighties were the best we ever saw in metal and Steel The Light was one of the many Classic must know albums of that era. So how were they live, well sensational. Bringing the songs alive on stage and Hans and I knew we were witnessing a highlight. Turning darkness into light!!

2: Trial - Merleyn 13 February
Trial are on CD probably my favorite discovery of this decade. This was the first time I saw them playing live and man did they live up to expectations. In a far too short set opening for Portrait and RAM they managed to convince me. Linus reminding me of Devon Graves in his gestures and the band playing their heavy metal full of prog and doom references with class. Now I wait for a headliner set.

1: Armored Saint - Dynamo 10 August
Some nights everything falls perfectly into place and this was one of those evenings. Armored Saint playing their best album Symbol of Salvation fully and in top form. Book-ended by some Classic other songs this evening was sensational, As we stayed in Eindhoven for the night, no rush to last trains home, just enjoy what we just saw. Saints will conquer. DMF this band should be headlining in 2019.