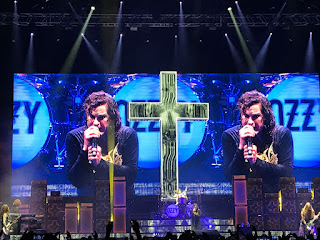 Ozzy and Priest playing together. Me not going to large metalfestivals for years, Magchiel and I decided last year after Stampede in Bristol to have one old school party abroad together per year. And most of all Lisbon being a home match of sorts, as I was visiting Josie anyway this weekend. All in all a show not to miss for us. And then I started digging in my memory, trying to avoid the gaps over the years. I believe I only saw Ozzy at Monsters of Rock Germany in 84 and 86. For Priest I believe the Arnhem show with Annihilator and Pantera in 91 or 92 came after the Zwolle show with Bonfire. So while both Priest and Ozzy make part of the basics of my musical formation I had not seen either in ages. Before the Monday show we got to spend the weekend in beautiful Lisbon. Magchiel being there first time loved the city as well and did support Portugal in the Portugal Arena against Uruguay, but that ended not as we liked. Two days Lisbon also means climbing and descending for hours, so when finally arriving at the Altice Arena we were close to exhausted to start with. So up to Priest and Ozzy to get us in the mood again. Spoiler alert: they did. 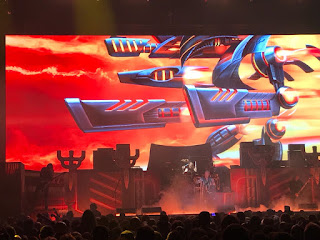 Judas Priest as support act. I did not know how that would work in Lisbon. Following the metal gig agenda on undergroundmetal.pt I thought they might be way more popular. But then again this was no underground event. Apart from the bands playing most shirts spotted were either Maiden or Metallica, with hardly any underground names (Budgie was named). This hall hosted the Eurovision songfestival in May and it seemed that Priest needed two songs to clear the hall from this camp party against good music.So Firepower did not blow as impressive as on CD, but as soon as we heard It's Monday night and the Priest is back and arrived at Sinner/The Ripper all was good. Well not just good, what a party we got. While Rob Halford walked the stage very slowly his voice with effects or not still reached some high screams when needed. Highlights to me were Turbo Lover, Freewheel Burning and Painkiller. Last song closed the set as announced, which after one hour could be. Than we got an encore, which made sense given the number of Classics not played. To my surprise  Mr. Glenn Tipton joined the band and we got treated on Metal Gods and Breaking the what?. 75 minutes of Priest was well worth the trip already and to Magchiel winners of the evening. 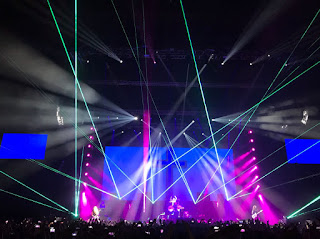 While waiting for Ozzy we noticed the Arena was packing up from decent to very full. This meant that the toilets and bars got queues too long to confront. As the beerselling backpack also disappeared suddenly it was all about the music. Well never would I have expected Ozzy to follow a similar line for this show, as his voice was great and he seemed very fit and well humored. Opning somehwat surprising to me with Bark at the Moon, followed by Mr. Crowley and I Don't Know the party was officially opened and the roof came off. And this was not just Ozzy, the band was on fire with a leading role for Zakk Wylde on guitars. Actually Adam Wakeman of Headspace fame was very good as well.  As Ozzy has no recent album to promote the setlist turned into a greatest hits parade, with some Sabbath blended in. My highlights were No More Tears, Shot in the Dark and Crazy Train. But actually the full show was entertaining with a minor break halfway. As Ozzy needs his rest to regain forces there was a very long guitar solo moving from right to left of the audience offstage. While being impressive it lasted a bit long. Hereafter followed a drumsolo which gave nothing special really and when Ozzy came back the weakest song in the set (I Don't want to Change the World) followed. In the end it was not that bad, just a small drop in the high we experienced. After the full set the encore brought us Mama I'm Coming Home and Paranoid. The latter even bringing a pit in front of us and showing many happy faces around when it was over after 95 minutes. 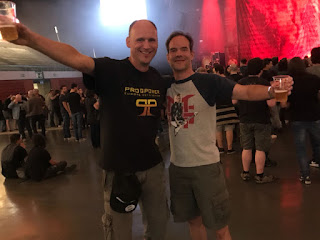 So this was one great trip to Lisbon and we should think next year what can follow this up. On the bands future there was alos some clarification. The Priest will be back was shown in great letters at their end of the show. Ozzy is touring under the name No More Tours Vol.2. The T-shirt of the Vol 4 Sabbath album, so who knows how long this will drag on. Ozzy seemed in shape to go on for some more time, carrying buckets with water to throw over the front row. So People look to him and say, is the end near? when is the final day? I don't know!!
Posted by erikprogtricolor at 22:24