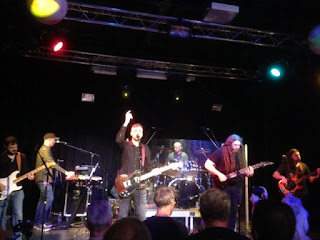 Next week it is Night Of The Prog at the Loreley and Anubis are on that bill. Before that major prog festival they are making a small European tour, starting with the world famous quadrangle, Hoofddorp, Nieuwerkerk a/d IJssel, Paris London. So this meant two opening shows in Holland and as they both had a very different character in advance I went for the double. For those not knowing the band a short introduction. I discovered Anubis in 2009, when they released their debut album 230503. This was one beautiful concept album holding all the characteristics the band kept until today.  Their main style is Neo prog maybe, but there is some eighties pop blended in and at the same time they can go more metal than most prog rock bands. For me this blend works wonderfully and I can state they are my favorite new prog rock band of the last decade. Their succesive albums A Tower of Silence, Hitchhiking to Byzantium and last year's The Second Hand all confirmed that status. A few years ago they had their first 3 gig European tour, which brought them to de Boerderij's small stage. All present that day, for sure would try to see one of the two dutch shows now, as they played very well and very long that memorable evening. So to say that I was looking forward to this weekend can be called an understatement. Warm sunny temperatures or not it was de Duycker for me on Saturday evening. Do I need to link to the worldcup somehow? No I don't need to, but it was funny to see England qualifying for the semi-finals before leaving home,  where especially Belgian but also Dutch TV spoke about a poor team and the BBC starts believing football is coming home indeed. But back to the music. 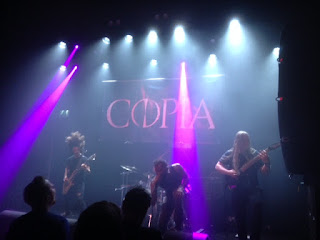 The line-up in Hoofddorp was surprising to say the least. Where Anubis plays mainly progrock, the other three bands seemed to be put on stage especially for those dutch fans, not willing to travel all the way to UK Tech Fest. This meant screams, grunts, polyrythmics, many strings on guitars and basses, plus the obligatory beards. The performance of the three bands was for me widely spread and I could enjoy them together with some ProgPower regulars in the hall. Opening band Transient State played varied and loud, but did not play any melodies that stayed in my head. After their gig the discussions were mostly about the HEAVY bass drones in one song sounding and feeling pretty uncomfortable to me and most around me. Those without earplugs. might need to see a doctor after the weekend. With Hillsphere matters changed dramatically for the better. I saw them once in the past and remembered and instrumental band. Now they have added a vocalist and at once promoted for me to the absoute top of Dutch progmetal bands. As if this voice was what they needed to feel fully comfortable. Great songs and good performance, so I was getting their CD. Untill I waited too long and noone was behind the table, making me sort my Anubis merch first. I will see them again hopefully soon and shall get their CD anyway. Closer of the night were also Australian Copia. These guys also play progmetal of the extremer form, but my first impressions were positive. For starters their vocalist had a good voice on the clearer bits and power when heavy. Adding the hectic playing I quite liked what I shortly saw. I say shortly as I needed to get the last train home (Note to self Armored Saint in August car might be the better option) When you put on 4 bands and start at 20:30 only it is bound to happen that people need to leave during the last band catching last public transport.Copia is touring Europe for the fifth time now, so maybe they return soonish. 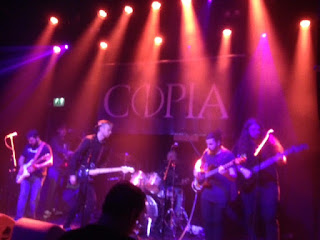 And what did Anubis do as lightweight on this heavy bill? Well I thought them concentrating a bit more on their metallic side. Later on they told me I heard wrong as this is their usual style of live shows. Whatever the style, how great it was to see them reaching same heights as their Boerderij gig from the past. Of course this would be a shorter setlist with four bands, but it did hold epics, calm bits, heavy guitars and those beautifull melodic solo's. One characteristic I did not mention yet, is they are also fond of darker lyrics covering some rather depressing love-lifes. One of my favorite songs on that respect is Dead Trees. Haven't we all at times slowly but surely been driven to the bottle, so how nice to hear that sung to us in a wonderful song. A telephone ringing brought us back to the 230503 album with The Deepest Wound. Further focussing on the last two albums, we did also get a teaser for 't Blok in All That Is.. from ATOS. With a solid performance I only started looking forward to the full show of today and went home pleased with my Byzantium Tee and the acustic CD. 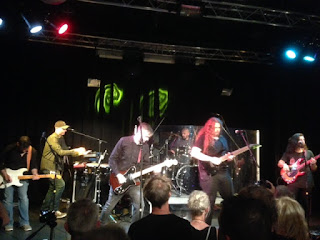 't Blok holds prog shows organized by Prog Frog. Those few times I have been there I always have to start with a compliment for the organization. Never will you find anything more relaxed, where the volunteers welcome you and serve snacks during the gigs. But how nice everyone might be over there, the biggest compliment must go out to Anubis. How often does it happen that you see an underground band with six great musicians dressed  in black giving you a show of almost three hours!!! This is a show without any films on the background, pyrotechnics, or amazing lightshow. How great is that? well go catch Anubis on tour and find out for yourself. Today  A Tower of Silence was going to be played in full. That was after the short break. The start of the show had some overlap with the night before, but was not following fully the same order. Even more surprisingly with the very long playing time they left some songs out that they played in Hoofddorp. Seems to me they rehearsed their full catalogue, so another thumbs up to that. During ATOS the order became predictable, and my highlight was And I Wait For My World To End (did I tell yet they like to write darker lyrics?). So when ATOS ended we did get two more songs without the leaving stage routine. These Changing Seasons from the last album and that song from HTB with the endless closing guitar solo Silent Wandering Ghosts. Well no words to describe this show really. This band gives so much to the audience that you feel humble just watching them. As if it all was not enough we got the question if we liked another song, long or short. So Disinfected and Abused really closed the afternoon with another hihlight in the heavy banging part of  Knives and Forks. So I am still speechless, which is not the reason that I did not wait for the band to come out. That reason was dinner with Tiago after such a long set. I did have a word with them in Hoofddorp and these sympathetic guys deserve in my eyes a breakthrough. I hope that the NOTP festival with a large audience can bring them many new fans. If you have the chance to see them, don't miss out. Thanks Anubis for two great gigs within 20 hours and that all jetlagged. If football is coming home or not to the UK. Anubis is passing by thsi Friday. Seems an easy choice for me. Today all those  going to the beach or organizing a summer BBQ proved to be wrong again.