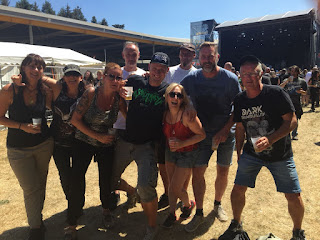 Dynamo Metal Fest seems to be back on our annual calendar, holidays allowing that is. This being the fourth version after the return the program seems to focus at least partially on the older generation of fans. No wonder that several bands spoke about songs for the old school fans. At the same time it becomes a yearly reunion where you can catch up with freinds you didn't see at any venue around you recently. This year the sun was out and in the afternoon the thermometer showed us 31 degrees, which meant a good old steaming day in Eindhoven. We travelled with nine this year and we almost all had to swallow a deception up front, when Sons of Apollo had to pull out unfortunately. It always is hard to replace an international act last minute, but we were somewhat disappointed with the return of Vuur. Well that is 8 of us, as Lida is a fangirl of  any band where an Ayreon vocalist turns up. 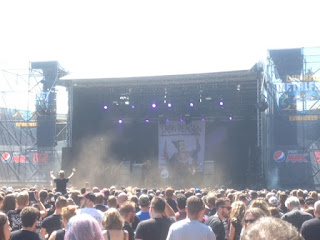 Trains were early after a summer evening in the city the night before. Upon arrival the connecting busses were functioning much better than the year before and alse the entrance was swift this year. Early train or not we managed to miss opening band Elephant from Belgium. Well if they tour the Benelux often I undoubtly shall run into them soon. For us openers were Iron Reagan with their punky thrash metal. That sounded refreshing and very nice for an opener and the pit was big from a distance. The only mistake we made was that while the ladies went shopping we started with a beer. Following an unwritten rule 4-5 songs means a next beer was kind of tricky as Iron Reagan plays fast and furious songs, which can last some seconds only. Good band and if we were in the mood already it wa up to Vuur to reduce energy levels to another day in the office. Sorry, but Anneke might be one of Hollands most famous vocalists for me that voice does not work. Well on the background or in duet with Devin Townsend it does, but Vuur is just not my thing. 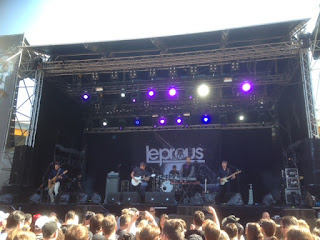 I Am Morbid was the right band to wake us all up again. This band around David Vincent gives you Morbid Angel songs. Last year I saw them in het Paard and that worked better for me than on the meanwhile steaming hot grass or what was left of it. Still a nod with the head banging along fast drums and heavy music was fine indeed. Next on where the band Iwas most curious about how they would go down. Leprous is for us a revisit after two Progpower shows in the last decade and a few indoor gigs. Now I loved them the first time I saw them at PPE when they had released their best album Bilateral. Later on I saw them either disappoint a bit or fully impress again. So not sure what to expect I did lose them a bit not getting their last album Malina after somewhat disappointing albums before. In order to judge fairly I moved more upfront, where I ran into a firm PPE delegation. Technical problems with no keys delayed the start a bit and then they were brave. I was hoping they would metal up their show a bit, being at DMF. Well they did none so and gave us only newer songs. Still the performance was tight as we are used by them and at times it was very good. Up front the reaction of the audience was pretty OK and Hans next to sound tower told me at the back they were partially appreciated as well. Hope they gained some new interest as fish out of prog water on Dynamo. 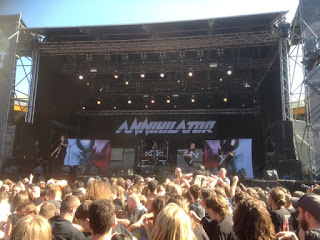 With the Sons of Apollo cancelation for me the band to look out for most was Annihilator. Never seeing them giving us a bad show ( I was not at Alcatraz 2016) I was looking forward to see some classics passing by again. I missed the Alice in Europe tour in the late eightes, but the Never, Neverland tour stopped in The Hague as well and from there occasionally I saw them play again. Different line-ups, differnt vocals, but always good. Nowadays Mr. Waters is taking care of vocal duties himself again, which went rather well. So again moving forward to have  acloser look, Mary and Astrid joined and we were just behind the pit eating dust for 50 minutes. This was no problem whatsoever as their set was glorious again. I do not have that many albums by them but seeing King of the Kill, Phantasmagoria or Set the World on Fire works for me any day. 50 minutes is short, but Annihilatr managed to give us a fairly good overview from old to new. When the show was coming to an end we knew Alice was till going to be put in Hell. What a great song that still is! With Jeff Waters being smart we were invited to sing the twelve times very high Alice into the deep in hell. I did so loudly and hope they appreciated. I definitely enjoyed Annihilator again and a pity they were the only band without any merch at the market, my sympathy vote would mean a T-shirt or CD I do not have yet. 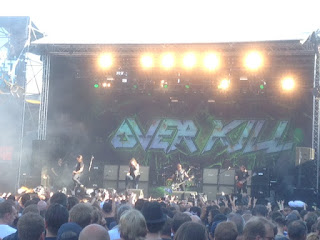 After this high another one followed. Overkill on stage means a party. This band leaves no prisoners either and thrashes hard and tight. One added factor of fun during their show is the Dutch mr Bobby Blitz speaks. Lines as Ik hoor je niet and Tjongejongejonge came out well and brough many a smile to the ice-rink. Similar to Annihilator they understand we need to hear old and new songs. So Rotten to the Core, In Union we Stand and the inevitable Fuck You made Eindhoven one happy moshing place. What a great band and for us brilliant closer of the party. Closer indeed as the last two bands Ministry and especially Ghost could not interest us all. With all of us being 50+ we already had our bags full (zakken vol) and appreciated an early train home. Ghost is a generation thing indeed as when we walked out there were still people arriving freshly at the stadium. Sad for them as to could get such could histry lessons in metal this day. During the day it seemed at first way emptier than last year, although the move of merch stands to inside opened additional space. When we left it seemed suddenly very busy. One fine day in Eindhoven it was with decent food options (The Asian was good this year) and faster beers than last year which were also filled up to avoid last year's half empty computerized glassses. Next year we shall be back and I would like to see some returns from the 91 version I attended (Psychotic Waltz, Armored Saint, Extreme and Obituary would mix genres nicely) Thanks Dynamo and until 2019.
Posted by erikprogtricolor at 14:39