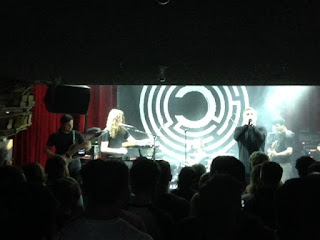 26 June 2018 was one of those days. Originally I was planning to see Ritchie Kotzen in Leiden. Then the Heavy metal party of Iced Earth and Martyr was announced in Alkmaar. Work would bring me the day to Amsterdam for a Metal Bulletin Conference. My work as my musical taste are both very much rooted in metal indeed. This conference made Alkmaar a bit complicated on trains and timing (as unfortunately proven by Robert, but that's another story). And then there was the announcement of The Contortionist in Patronaat. The Contortionist state they play Progressive metal on their FB page, but with a foot in djent I'd say. Actually in that genre they are probably my favorite band. Watching the site of Patronaat it turned out that Soulfly would play the main hall the same night. And to complete the busy agenda on the train to Haarlem some Leiden students entered on their way to Limp Bizkit. When they started talking about House Festivals it only confirmed to me that Limp Bizkit has nothing to do with Metal. 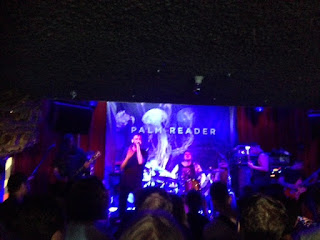 Arriving at Patronaat it was warm and busy outside. For some reason Patronaat decided to put The Contortionist on the bar stage instead of the small hall. This meant sold out, but also slightly tight to move and the low ceiling there is somewhat annoying. First band of the evening would be Palm Reader from the UK. This band reminded me more of the older The Contortionist as vocals would be mainly screaming and the  band was pretty heavy. I liked their enthusiasm and sympathetic announcements. Musically I thought this to be nice live, but I was not attracted to get their last CD. 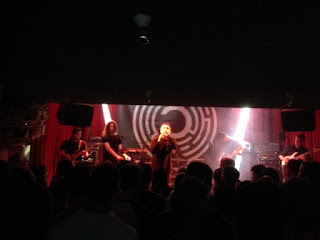 During the break I learned that Messi made a rather nice goal. My decision to not watch the possible exit of Argentina was rewarded by today's Riesenentauschung from the Germans. Before The Contortionist kicked of let me share my history with the band. I discovered them when Aardschok wrote about Instrisic as something like only for those who consider Rush too straight forward. Checking that album out I loved Intrinsic. Mostly heavy they had plenty of short calm breaks which made a great balance. Next album Language made it high on my list of albums of the year and the trend was more clean vocals and calmer music. Now they are touring last year's Clairvoyant album, which eliminated harsh vocals altogether on the front. So to say doing an Anathema in their career this last album is filled with beautiful music, interesting enough to keep all technical music lovers on board. So the question was, how would they bring this set together and is there still space for the heavy. My hopes were high, as during their Language supporting tour, they blew Tesseract of the stage. An opening tune started 21:00 sharp and the start was for the Clairvoyant album. This is actually such a beautiful album that many people out of metalworlds should be able to like it. But that is the return to the old exposure story. The second song was a heavy monster and I did not recognize it, so probably from the Exoplanet album. This is just wat I wanted mixing the heavy and the mellower. During the remainder of the set the focus would be on the last two albums, but occassionaly it all blasted. Now I did recognize the songs, but cannot immediately place title and album next to it. So I just state here that The Contortionist surpassed my hopes and expectations and I now also came to love their last album even more. Their presentation is rather introvert, but their playing is from another (Exo?) planet even when they Return to Earth. Happy to see a band confirming their status with me and who knows Complexity or Progpower can get them back to Holland any day soon.
Posted by erikprogtricolor at 20:55