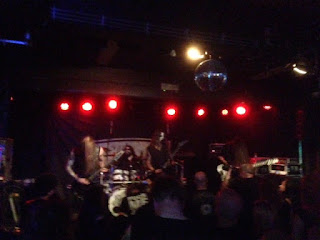 Monday night and an extreme metal package hits Musicon. Not any bands I know really, but with the sun shining for weeks, one can afford an evening in Musicon. Timing was twofold. Dynamo Metal Fest was Saturday and many were still eating dust, school holidays started meanwhile and Monday was never a good night. Yet World cup is over, Tour de France had a day of rest and this show was the only Dutch gig on tour. So Musicon filled up decently and I just let it all come over me. 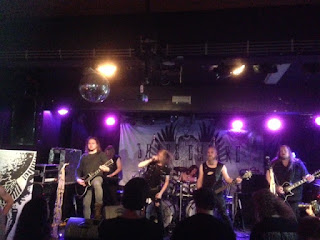 Opening band Shade Empire were announced as Epic Symphonic Metal. It did not take long before I realized these Fins were the bastard sons of Stratovarius and Dimmu Borgir. Yes there were obvious Nordic Power metal traces with the occasional good clean vocals.The Black Metal-ish part was very symphonic indeed. And with keyboards on stage we still could hear a fair amount of tapes playing as did spoken word parts and even main vocals. Yet I did love this mix of styles and had a great time watching the "lightweights" of the evening ramblin' on. Pity their CD's sold out and their T-shirts were not available in XXL. Nice band and winners of the night for me. 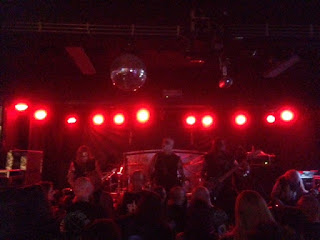 Hereafter matters would turn more black. Nordjevel looked the part with their painted faces in the heat and huge spikes sticking out of their arms. Yet their start was not that evil, with technical issues between guitar and amp, a long intro not tightly followed up and a mic not working at the beginning. When they did get going though I could understand why they had several fans seemingly coming for them only.  This was Black Metal from Norway just as one expects it to be. Their guitarist seems to be ex Abbath and the band knew what it takes to burn the place. A Norwegian flag was coming from the audience and hit the stage and all seemed pleased. A surprising end came when they covered Raining Blood, adapted to their style. For me this music works better on stage than on CD though. Same goes for headliners of the evening Hate. When they came on I started to feel my back from old age, standing too long at Dynamo and sitting too long watching football the last month. When I considered leaving fast I managed to stay somewhat longer due to good performance of this band. Painted yet more death metallic I must say this looked the tightest band of the evening and experience showed. Still not making it to the end I was pleased to spend my Monday evening at Musicon. Today this package hits Paris. So any frog sobered up after the party, go check them out.