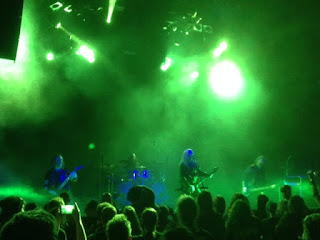 As it was about time to leave my recent pattern of attending only Sunday night shows I had two options to choose from. I decided for Death Metal over Progmetal. Not that I musically completely changed over, but I went for the energy coming off the stage. So Resolve and Armed Cloud shall be visited later on again. I was not the only one attending, although the crowd was considerably smaller than with Dark Tranquility only two weeks earlier in Leiden. 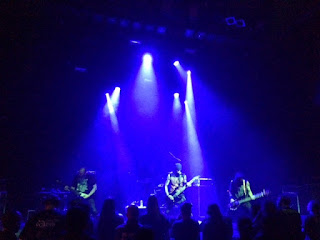 When I entered de Nobel main hall Seita just kicked off their set. This band is from Amsterdam, but actually from Brazil. So the songs were introduced in English and sung so as well. Although one song was titled Portuguese Ditadura. The band decided to stay away from politics unfortunately, as I would have been interested in their views on the fact that former president  and only candidate for this year's elections Lula was ordered to sentence in prison that very afternoon. They played music as well and that is death metal. At times nearing the technical variation, due to the guitars, so I quite liked what I heard. Good band for warming us up and if you are into Baseball interesting merch as well. Question to Nobel, why is it that first bands in the main hall suffer from a heavy hum coming from the speakers inbetween the songs? 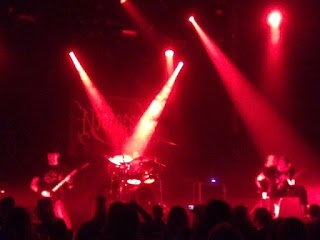 Second band were Neoceasar from Rotterdam. Last year I saw them a few times and their last gig I saw was instrumental as the vocalist could not join on Rene's birthday party. Glad he was back today, although during the first song you would not tell. Actually everything sounded dimmed and low during the first song. The band also noticed this on stage, as we had a small correction break after the opener. From then on it all became this Death Metal machine we saw before. Straight Forward in your face and no nonsense spring to mind. On CD I might prefer the more technical or progressive styles, live this is one fine band. Not sure if they won over new fans, as they play a lot. For sure they convinced us though that they are one of the forces in extreme metal in Holland nowadays. 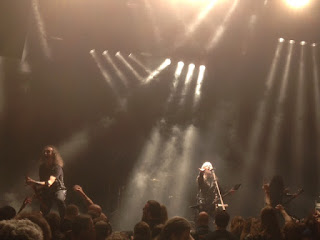 Vader already played Death Metal in Poland when the wall was still dividing Berlin. This tour they celebrate the 25 years (and a bit) of their debut album The Ultimate Incantation. Now that album was released in 1992 before Cynic's Focus, Amorphis' Elegy or Opeth's Still Life, so I was still not into grunting vocals. Now way past that, I could recognize the class of that album as well as the band. Interesting how you think you saw two good openers and when the headliner comes on, matters are brought to the next level anyway. Some 35 minutes into the set Rene asked if anything sounded outdated, as we were only listening to 1992 songs so far. No not at all was the answer. After so many years bands tend to become tight as a really tight thing. So did Vader and the guitar solo's that were thrown upon us randomly sounded very nice as well. So after the full album another five or six songs followed and we were left tired running for the bars or trains. Final headsup for the merch. I did not see too many green Death Metal shirts really (more a Djent thing) so I got one. Also the training jacket was rather awesome, but I passed on that which I shall regret later on. Tomorrow they end their tour in Portugal. Shows that my future home country should not be all that bad on gigs with after Vader next week Insomnium/Tribulation passing by on Tuesday and Dark Tranquility to follow on Friday.
Posted by erikprogtricolor at 16:58