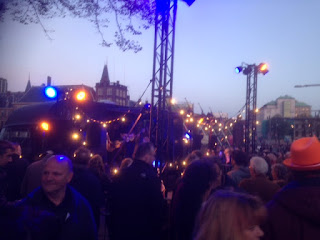 In Holland we have a king. The only thing he is good for, is giving us a national holiday in April. Since he took over from his mother the holiday moved from 30 to 27 April. This probably shall still result next Monday in some tourist appearing in Orange in Amsterdam, reading their old travel guides (or is internet the only source nowadays?). Anyway the country celebrates his birthday today and in The Hague the bigger party has been the night before since the late eighties. Starting off as a Blues festival with live music in almost all bars and beers on the streets it now turned into a major festival with all kinds of music on stages throughout the centre. The only places to be really were the blues stage which turned out to be a tiny caravan with te drums on the ground before it and the Rock&Louder stage in front off our government buildings. So arriving around 21:00 with Pieter, it was off for some blues first. Running into Niels and Ingrid we mainly were talking, when on the background first a decent bluesband played, followed by a somewhat grungy rock band. Not knowing any bandnames it was of for some Rock & Louder hereafter. 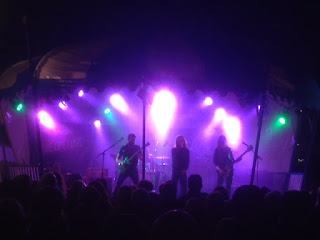 The band I was most looking out for was Death Alley. The former night mayor of The Hague spoke in dutch about an alley, yet still managed to announce them before and after their gig as Death Valley. Death Alley play speed rock with some side steps to psychedelic bits. The start was very promising and they rocked us nicely warm on this cold evening. I was considering getting their album after the show, when they made a change over the set. Suddenly we got long instrumental parts, where not all that much was happening really. This might work within a small venue rather well, but on this cold evening it did not. At least not for me. So in the end I liked their start, but the long jams made me decide to check them out on internet before getting an album I might never play.
After Death Alley from Amsterdam, Brutus from Belgium were to close down the stage. This trio also played powerrock, but with less of a metal edge. Most striking was the girl behind the drums, who also was their vocalist. The drums were placed sideways at the side of the stage therefore. I was not sure what to think of them. At softer parts they sounded to me a bit like their countrymen K's Choice, while at their heaviest they were pretty heavy indeed. Musically to me not as good as Death Alley, they did create some atmosphere with their songs resulting even in some pits before the stage. Now as Roy also noticed these pits were different from the usual metal pit as people seemed to move more up and down then sideways as we normally see. All in all a pretty good band for some live music accompanying your beers. Around 01;00 it was over and out and the stage closed down. For George and me this meant going to de Huppel for a beer to close the night and we could officially celebrate Wimpies birthday, without mentioning him once.
Posted by erikprogtricolor at 11:52