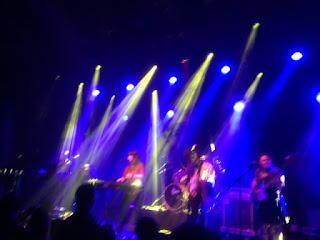 This review has to start with a warning for Andy: If yesterday you already were upset that I am going to see Q5 this summer, you might not want to read about me seeing one of your recent favorites. To make it more serious I even skipped Blind Ego, high on your 2016 best album list, due to family priorities. So Progdreams 2018 started this Friday night. Josie was also arriving at Schiphol at 22:25. So as faith decided I could just see the band I was most interested in until 22:00 and leave for the airport. Now I saw and liked Blind Ego last year, but they shall return I guess. Progdreams is a small event for connaisseurs of Progrock. Through the years they showed always to include some interesting and exotic names, often before they breakthrough (as long as that is possible in Progrock). So while I only could attend the Friday night partially, bands like Alan Reed, Dave Kerzner or Lifesigns would be very interesting indeed along top headliners Magenta and Steve Rothery. Now Tim Bowness already cancelled due to snow in England. As he was only scheduled for Sunday this did raise some eyebrows. First today the snow is disappearing fast here already and second Bent Knee took 4 trains and a night ferry to make up for a cancelled flight from London. Yet not knowing any details we can only guess. The program today suddenly shows Focus instead of Lifesigns as well, so the UK must be much worse indeed. 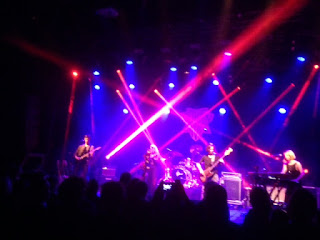 It was up to Dutch band Golden Caves to open the festival. Now Andy is not the only one impressed with this band. The fairly large international Progpower delegation present seemed to like them as well and the famous Roarrrr towards the stage did surprise some people unaware of this crowd custom. Now I started completely blank on this band and could judge for myself. Well first the playing and principally singing were above average. This girl has a great voice and luckily stayed away from operatic screaming. While the band was also good, not all that glitters was gold to me. The songs themselves did not make much of an impact on me, as I missed variation. All moody and calm I believe as always that one fast short rocker would boost their set and one long epic guitar solo sounded welcome to me as well. Still I did like the performance overall and during the last two songs a bit more of a bite was mixed in. I guess they won over new fans and reconfirmed their talent to old ones. 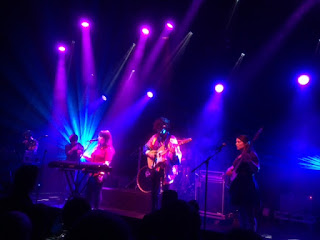 The band of the evening for me however was Bent Knee. Last year I discovered them when they released their already fourth album Land Animal. Now their music is hard to describe as it hangs between genres and styles really. So let me start with the looks as they were also not your every day band. As I am a tall freak myself I am allowed to comment on heights and the majority of Blind Knee is not that tall really. Passing the stage  from left to right we had a kind of DJ on the left. Wearing headphones his role was unclear to me, but I guess he took care of some soundscapes in the music. Then we got a small violinist who was moving around while playig or picking his violin. Centre stage the lead vocalist, a small lady with an impressive voice (Ani di Franco alike at times) and strong presence on stage. During the calm parts she could dominate the audience Hogarth alike with just a voice and a few keys.  On the right the female bass player who danced through the show and when she got lead vocals in one song I was reminded of This Mortal Coil. On the back the drums were steady and moving from heavy beats to soft accompanying the calmer parts. So now I skipped the guitarist and he really was the hero of the band to me. His head reminded of Zappa,  his colourfull unbalanced jacket he must have bought at Zeeman in the eighties and his playing was flawless and varied. At times he took off his glasses allowing him to bang and jump more franctically around stage. To make the interesting picture complete inbetween songs the band as thank you to the audience starting waving to the crowd. After a while people started waving back and the whole show got a royal tour through the city atmosphere.
But they played music as well and while I only have one album I recognized many songs and the new ones were easy to follow as such. Yet there was something contradicory happening with me. I totally loved the show and performance, while at the same time this is not your typical music I could absorb any time or day. So while we have friends, without the need to mention Esther and Michel, who followed Fates Warning through Europe on the full tour I can see how brilliant that is. With this band I now saw it and do not need to see them again anytime soon. Next year would work, but the same set on the same tour again would be too much. Yet if you have the chance to ever see them, go and do so as this is something atypical and interesting. They made the huge effort to reach Zoetermeer in time  and I was pleased to be at their debut show in Holland. I only believe they made an exchange rate mistake somewhere as underground shows with CD's for EUR 20 and shirts for EUR 30 was something new to me. And while I am writing this day two of Progdreams starts. Maybe one day the timing suits me so that I can attend the three days. as small festivals like these deserve all support.
Posted by erikprogtricolor at 15:26