Coming home sick after a short week travelling for work left me with time to listen a bit better to some interesting recent releases. So herewith my thoughts and buy recommendations. 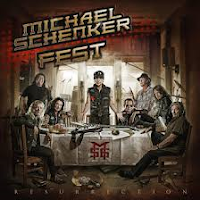 Michael Schenker Fest - Resurrection
Last year Michael Schenker Fest hit Holland and it was one of those shows that blew me away. Michael Schenker getting back the three vocalists of the eighties. This together with Ted McKenna, Chris Glen and Steve Mann meant a party indeed. Going through a history of my youth sounded so good and the atmosphere and playing were on a high. So when a new album was announced, I knew I was going to buy it for completion and historical perspective alone. Now through the years I did not get all his albums, but a decent number. I never expect the impact that he first three MSG albums made on me, but at the same time the guitars always kept on sounding great. So when the album opens we get the first surprise with uptempo Heart and Soul, a fast rocker. On the guitar parts a certain Kirk Hammett starts a dual with Michael just to set the tone I guess. Next song Warrior is the hit from the album and allows all four vocalists to share the duties. With the singalong chorus this should becoem a live anthem. Actually quite a few songs tend to have this massive chorusses and should work fine on stage. The split between the vocalists is made and I like the Graham Bonnett song Night Moods as it fits his voice so well. The album sounds like a bunch of people having fun, making an album in the style we grew up with and love so much. Including Doogie White in the Fest made sense as his voice has a different colour as well. A final word for the guitar god himself as he still manages to talk to us through his solos. My only doubt is in the title Resurrection. This implies MSG was flat on the floor before, while I have seen several very strong shows in different setups (MSG, Temple 0f Rock) over the past decade. I guess "continuing on top of the game" didn't sound as catchy as album title. 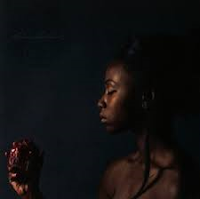 Oceans of Slumber - The Banished Heart
Well did they make it hard for us listeneres on this one. Oceans of Slumber announced over the last months that their new album would be dark and heavy. When I first heard it not giving it all attention, maybe disappointment was lurking around the corner. Well that got corrected by now, but still listening to this album in full ain't no walk through the park. Putting perspectives I discovered this band when releasing their debut Aetherial with Ronnie Allen on vocals. Being something very new and refreshing to me that album became my album of the year 2012. When Winter was released in 2016 we got a surprise with swap of vocals to Cammie Gilbert. This new setup worked very well for me as well and having the chance to see them on stage opening for My Dying Bride and later Enslaved I could see how great they are live. So we have here a potential favorite band for the coming decade in hands, so expectations rise accordingly. This explains the initial disappointment as well, while at first undetailed listen it seems to have too many calm bits. Oceans of Slumber combine extreme metal parts with soft piano bits just like that. Well that is still in place, the playing as good as we got used to and Cammie does have a striking voice. So opening with some long songs that change moods at first even Madder Mortem - Deadlands era comes to mind. Enough going on and happening here, while in At Dawn they possibly released my favorite track of the album. The title track is a sort of long power ballad with a beautiful building up of emotions towards the end. We continue heavy after a dark instrumental sound effect piece with Etiolation and  A Path to Broken Stars. Why the latter has it's lyrics not pulished in the booklet is unclear to me. It is the one song that stays fast throughout. When already exhausted we get another four songs all rather mild in tempo and dark in moods. While certainly some will consider the duet with Tom Englund (Evergrey) No Color, No Light a highlight I prefer the title track as ballad.  Closing down with a 150 year old cover is original and different again. Now I still have not heard by far eneough of this album to opinion how strong I rate it. There are very good songs for us and the darkness has to become clearer in time. I can safely state that they released a thrid top album out of three (plus a cover album Blue). Now Oceans of Slumber return to 013 yet again. While I could accpet them opening for MDB and Enslaved, opening for Epica just won't do. So I hope for a long headline slot one day soon. And yes I will repeat my requests for Coffins Like Kites as after all Aetherial still might be their best album. 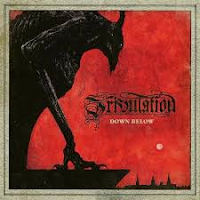 Tribulation - Down Below
This band is on another fanbase level for me. I saw them touring the previous album The Children of the Night in Leiden and loved their performance. This band has the remarkable characterisitc, that their voclas are much heavier than the music itself. I already felt this with TCOTN, but with Down Below they take it to the next level really. The vocals continue Blackish, while the music is actually very accessible. Opener The Lament starts procedures off very well a catchy upbeat song. Going through the album this new style is omnipresent and it works wonderfully well to me. Instrumental Purgatorio halfway through could have been on a Faith No More album in the nineties. This band is very much about shocking. The stage clothes already did surprie in the past, while this mix is bound to confuse people as well. The voice far too heavy for many and the music too light for others. Pity that the Tribulation / Insomnium package skipped Holland and plays Lisbon in April three days before I arrive. I could do with another Tribulation live show and see if the album grows even further herefater.
Posted by erikprogtricolor at 18:10