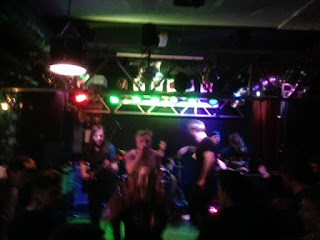 There is something good happening on the metal front in The Hague. Various styles of metal are represented by newish bands that over the last years showed to have it in them to become a national force in their genre. To name but a few: the Thrash metal from Defazer The Death metal of Warborn Waste, the Progmetal of Resolve is returning next month with a new vocalist and Power Metal Boreas was unfortunately a scheduled one-day fly. If then THHMA brings international bands to town/region and after Metalcon died The Hague Metal Fest takes over, it is not all doom and gloom behind the dunes really.

Icarius are the local hopes in the modern metal(core). As family is involved for friends, we use to get some people together when they play a local gig. Icarius a young band. so they bring a young audience of friends and fans. As a results the six of us upped the average age at least 5 years. HPC filled up well enough and we could wait to see if they keep on getting better. They had two support bands tonight, but they were not really my thing. Both the deathcore from District of Misery and the Pearl Jam light of Rain Nation did not make much impact on me, as these bands should just keep playing live shows to improve. Icarius we already saw several times and yes they manage to keep their curve of performances going up. Three guitars lay the base and for the first time this evening one of them actually played nice solo's during the songs. Also the vocals are very good, both from Nick as their second voice. If we add a band bouncing around the stage and an audience jumping along every now and then it was a good show yet again. Last month they won the Metal Battle Zuid Holland in Baroeg, so let's see where they can go from here. For us it probably is 6 april Musicon for seeing them again. Now that they also have an EP for sale we might even recognize 5 songs next time. Keep an eye on these guys as they might go furthest of all them local bands.
Posted by erikprogtricolor at 16:03