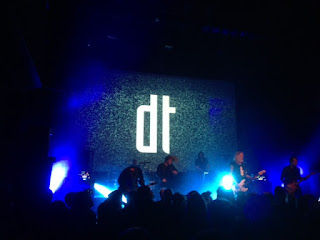 One and a half year ago Dark Tranquillity released their excellent album Atoma. So last year they toured Europe part 1 and this year part 2 follows. Intereseting enough both tours stopped in Leiden at de Nobel. Now last year I did not go, so I checked why and found it was Easter, Josie was over and the next day Persefone played Hoofddorp. This year it is the other way around as Persefone play Hoofddorp on Friday when Josie is here for Easter break and I turned attendance between the two bands around, how fair is that? In order to promote this with some friends I put in our concerts app group for those who like In Mourning. Well that convinced Peter enough so we could have a few beers and raise the average age by a year with the two of us. Before Dark Tranquillity came on, we had two supports and this evening must have been one of the steepest curves of interest I ever witnessed. Starting band Miracle Flair plays this kind of lame female fronted metal with poppy melodies. Nothing against female vocalists (I loved Savage Master last week), but I really had no idea why this band was added to the tour. The people slowly coming in answered their music with some applause, but it was too little my thing to say anything usefull really. 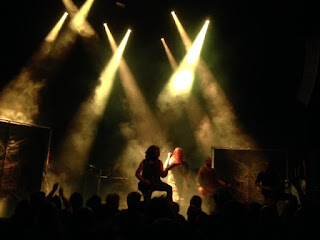 Equilibrium came on next and it took about two seconds to see this would be more interesting. They metalled up the night and their folky extreme metal mix went down surprisingly well to a young and jumping audience. This is also not my favorite style in metal, but since Finntrol at a Dynamo Festival begin this century I do at least appreciate the live party they create. Not too long ago I also saw Korpiklaani and that was as big a party. Tonight it was an evening of steep curves in appreciation, so I had some criticism as well. After a few songs the loud tape playing along started to annoy me.  It became to me as if I was watching some extreme metal idols of sorts. At times you heard more tape than band and every song started with the band showing us their backs and after some seconds of tape they would turn and join the music. While saying this I did appreciate the atmosphere the band created and the strong German accent gave the show an eighties feel as well. When they played their song Wall of Death I was almost tempted to hand over my beer and jump in, but I did not. So Equilibrium gave us a party, but I was dubious on how much was live really. Running into Magchiels cousin after the show he told me they recently lost their keyboard player, so maybe that is part of the excuse. 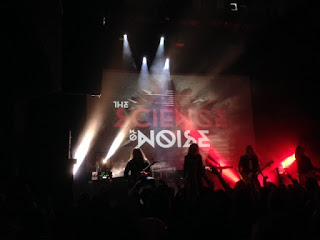 And then it was Sunday night 21:00 hours. The balconies closed, but the hall packed and the party could begin. A large screen for accompanying pictures and movies and a truly professional band on stage. This set was one great party celebrating Melodic Death Metal. The shirts mentioned founded 1989, while many of the people in were just a blink in the eye of their fathers at the time. I was around of course, but far from interested in Death Metal in 1989. So I do not know this band much longer than most of the people in, but recognized a few songs. This music and the solid presentation by the band, made it easy also for first time listening on many songs. Even more so with at times the strong images on the screen. Not sure if there were any specific highlights, but the images had most impact on Terminus (Where Death is Most Alive) their hymn on Gothenburg and Therein with the words Solid, Everchanging and Different appearing for us. Mikael Stanne did repeat more than once how he likes de Nobel and Leiden. so his promise to be back soon might be based upon reality. So Dark Tranquillity did end the evening just as I hoped for with a top performance. And yes it is nice to see a full house on a Sunday indeed. Due to several reasons this March I miss other weekday shows, but Sundays are going strong. Next Sunday there is more. 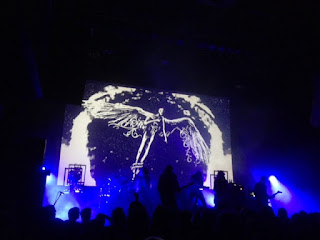