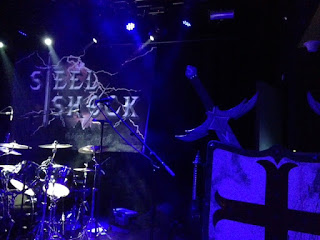 Sometimes Tiago and I run in parallel yet rather similar fashion. So when he left at the end of the afternoon for the city center to eat something with friends and go to an action movie, I followed soon hereafter in the same direction. Now I was off for Leiden to drink some beers and watch some battle metal. If only Tiago knew how fantastic that can be he might have joined. Unfortunately he still does not get eighties metal and I would fall asleep during Lara Croft so our quality time remains for breakfast and dinner. But I was off to Leiden to see two bands I did not know yet and with both sounding interesting in advance on the internet I decided to ignore the last remainders of a bothering fever and face the cold. Mid March temperatures were that low, that we could do with some Metal Fire indeed. I did not know yet, but we would get just that. 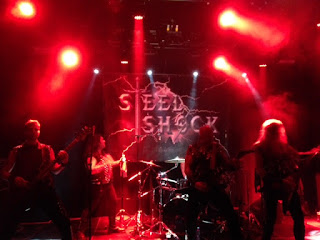 Steel Shock were the first band and only watching the stage with swords, armour and a huge banner looked promising indeed. The cover of their debut album For Metal To Battle promised us even more. Fully in line with some of the best albums of the eighties this design was beautifully ugly. Attackers - Battle at Helms Deep sprung to mind. Unfortunately I still connected the design with not that nice, but next time I will get the Tee. This is cult, authentic and true in one shirt. Now I only got the CD after the show, which was one partying way of returning in time. Most songs were mid-tempo and good old heavy Metal in performance, so yes the shrieks, the solo's and the whoo-hooos were all there. The lyrics mentioned  the Heavy Metal textbook with a remarkable frequent return of words like: Steel, Fire, Defenders and Metal. The result of this all, was that the fast majoriy of those present had a very good time and we can speak of a small sensation. No this might not be original in music, lyrics or performance, but it happens to be the music we loved when we were younger and still goes down so fine with a beer in your hand. Special heads up to vocalist Nima Metalheart who managed to remind me of Helstar, Virgin Steel and Attacker indeed. Nice to know we have in Holland such a defender of True metal walking around, hope to see much more of them. 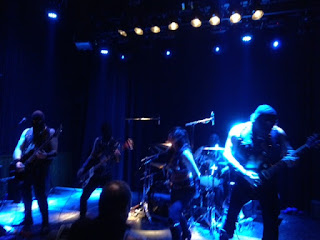 After this highlight headliners Savage Master were still to come. Soundchecking in their daily outfit, they left the stage to return with faces hidden behind black cloth. Apart from the vocalist that was. An impressive lady of small stature. Being the tall freak myself I am allowed to talk heights again, but looking someone wearing high heels and standing on a fairly high stage still straight in the eye must mean we talk different sizes indeed. What made her impressive was her voice. Luckily no operatic nonsense, but good old singing like we know from the eighties again. The event compared here with Doro, Lee Aaron and Leather Leone and yes that is the range we have to look at. Black masks or not the band played some mean metal as well. This hour and a bit flew by and  before I realized it they left the stage. Well they did return and gave us a nice surprise of a closer when Swords & Tequila came upon us with some help from Steel Shock vocals. Savage Master closed the evening in style and those who like their metal in eighties fashion had one blast of an evening really. I got myself one CD each and gained the knowledge that fever and beers do mix well and have a healing effect if consumed at right doses.
Posted by erikprogtricolor at 16:58