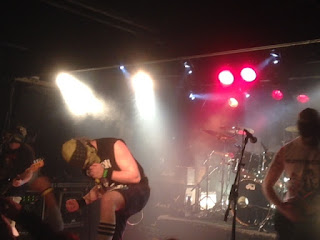 Thrash metal on a Sunday afternoon seemed a good plan. For me it closed a diverse 10 days which gave me Progrock, Death Metal, Classic Rock and Heavy metal before. Dr. Living Death on tour through Europe supported by some younger bands. I did not know any of them in advance, so just a few clips on Baroeg's event page made me go to Rotterdam again. Entering slightly late Dutch openers Razend were already halfway through their set. This was a pity as it turned out that Razend is a good band. They have a female vocalist who stays far from opera and reminded me at times of Agnete from Madder Mortem. The band played something between trash and US metal, with the latter influence especially during the semi ballad. As they are dutch I hope to see them soon again with a full set. Next on were the German band of the day Rezet. Musically they played a thrash metal style I possibly liked best of the day, as I heard several US references. Their mainly fast to very fast songs went down well and the clip of Minority Erazer is a good reference for further exploring. Koen told me THHMA had them play de Vinger in The Hague already several years ago. I must have missed that by not being around, as this was one solid thrash metal gig. 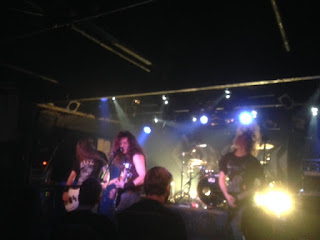 Next on another young band from another European country: Comaniac from Switzerland. Another good show as well. Their thrash metal sounded more European to me, but the delivery was as enthusiastic. No songs titles stuck with me, but also a band one can go and see for some moshing songs any day. So for Dr. Living Death the task to close this early evening off in style. Last year they played Alcatraz Metal Fest, but on the day I left Belgium. Dr. Living Death on stage meant masks, bandanas, bermuda's and loads of energy. This was by far the most energetic presentation of the day, with the guys bouncing around the stage all the time. While jumping around all the time, the playing was extremly tight. At the same time the reference with Suicidal Tendencies which I read before, was there for sure. Now ST are not my favorite band, but I could enjoy the show. So four interesting bands on a late afternoon/early evening show made for another Sunday well spent. 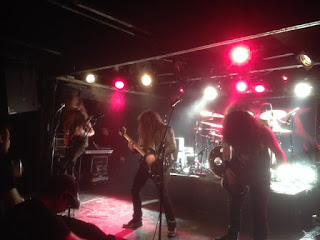