I thought I was going to spend this evening in Nobel in Leiden for some thrash and death metal, but a very nice evening at the Huppel last night. putting last dots on I's for our Lisbon football trip in April, made me change my mind. So why not share some CD tips on the heavier edge of my taste. 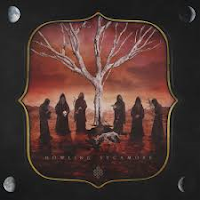 Howling Sycamore - Howling Sycamore
Now I wrote about this band before. When I first read about them and listened to the two songs they put on bandcamp I was hooked fast. With Davide Tiso (Ephel Duath), Jason McMaster (Watchtower) and Hannes Grossmann (Alkaloid) one can not expect pop music. To my astonishment I just saw only 791 people follow this band on FB. So while I stumble from one raving review into another for some reason the band is not coming through in big numbers yet. Now is their adventurous progressive metal not for the masses, but people into original and beautiful music should love this. Yes at times there is a saxophone, but only for increasing the haunting atmospheres. Jason McMasters never sung simple melodies, so he won't start now. There is a lot going on this album and the 37 minutes fly by. The opening songs are having a dark spell over them. After short instrumental Intermezzo Midway almost sounds accessible. Chant of Stillness a sort of ballad reminds me of the album by Midnight (The ex vocalist of Crimson Glory RIP, not the BM band). Descent to Light is an epic closer before the second short instrumental Dysphoria ends the album. Only 37 minutes, but more going on than on many extended discographies by your average band. The year just started, but I doubt many albums will make a bigger impact than this one on me in 2018. Listen to it! 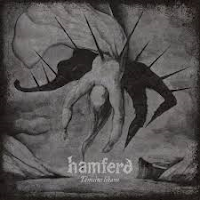 Hamferd - Támsins Likam
The Faroer Islands, a place the vast majority of people can not point on the map of the world. Yet they bring us now a second metal band of certain fame (after Tyr). Now Tyr became famous due to a whale hunting voclaist and banned shows. Hamferd can let the music do the talking. In this case I really mean the music as they sing in their own language so that can be just about anything (Actually it is the end of a trilogy about mortality and loss) Somehow this singing fits their death doom metal very well. The sticker on the CD said Death Doom, but they are fairly mild and the death part is not huge. This music is all about creating atmospheres and Hamferd manage to do so in an impressive manner. Six songs of an average 7 minutes with all an own identity really. Vocalist of Hamferd is Jón Aldará, whom I saw on stage during Dutch Doom Days in Baroeg with the band Clouds. I was already impressed by Clouds, but could not get their sold out CD. Now I have Hamferd on album and they come to Holland next Wednesday. As this is only a support slot in not so nearby Tilburg and the evening before I have to be in even further Nijmegen I shall pass. Yet this CD is definitely good for dark days around us and comforting us on long winter evenings. 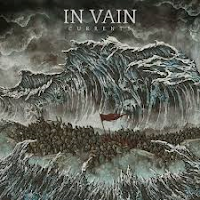 In Vain - Currents
In Vain play Death Metal, but not the most brutal kind. Actually they are very accesible and their technical version of same with many clean vocals in, might even make them suitable for Progpower. A band like In Mourning springs to mind as reference. Currents is the fourth album by In Vain, but a start for me. Well this tasted like more. Playing this album a few times in order to know the songs works best, as this type of Death Metal can even be hummed along to while slowly banging your head up and down. While the vocals can be understood easily, it is a pity that no lyrics are included with the CD. Well one sentence we cannot miss, being the gutteral low Blood We Shed when the music stops and the voice continues some seconds. Now In Vain are also coming to Holland this month. Well I shall be in Lisbon that day and big part of their target audience should be at Complexity Fest I guess. Hope they come back headlining soon, as this accessible Death Metal sounds like it deserves a stage for us.
Posted by erikprogtricolor at 21:53