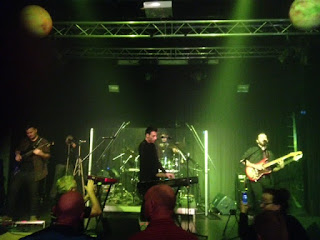 This show was announced over a year ago already. So when Andre said he could not have thought by then that the trains would not stop in Nieuwerkerk today he was probably right. Result of it all was that people came by car and the bar turnover lost. Now I have been a year ago twice before to 't Blok for Neoprog shows of Martigan and The Gift. I noticed a pattern with sympathetic volunteers and a group of what seemed to be regulars. Well this afternoon the regulars reduced in numbers, but in came a good delegation from Progpower including representants from Norway and Romania. Verbal Delirium did play Progpower once a few years ago. It was one of those years I missed out due to work travelling obligations. So I did not know Verbal Delirium really, but read Andre being very positive about them for a while (album of the year 2016) so I decided to check them out. 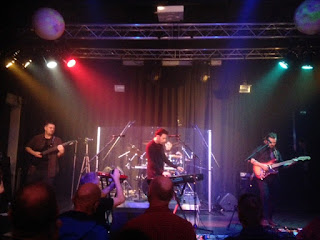 After the opening song the vocalist explained the band recently lost their keyboardist and he took care of all keys tonight. In order to stay balanced they also brought along their ex guitarist who played their first two albums. So more guitars is always good and we got indeed many long melodic solo's thrown at us. The set was broken down in two parts of one hour, with halfway a break of 20-25 minutes. Well that might look like an extended football match, the set itself compared with one as well. While the first half was calm and the home team looked to be losing 0-1, the second half matters got more energetic and they turned around the game into a deserved victory. As they more or less followed their three CD chronologically I decided to get the last album "The Imprisoned Words of Fear". Now let me describe slightly better the first hour was not bad, far from that. But it was in my ears missing some spice to it. The songs were all good and we got listening music to watch. That the band could play was clear to hear and see. Well to see for four of them as the bassist was living the cliche hiding at the back behind a guitarist in front of the amps. Roughly the first hour was progrock and after the break we got Progmetal. It seemed to me that I was not the only one appreciating half two better. So we liked the set, many pictures with the audience were taken and we got an encore. Well that started with a surprise to me. As the music world lost in Warrel Dane this week, we were treated on a Nevermore cover: The Sorrowed Man. This was a nice gesture of the band, who could not rehearse this song until earlier that afternoon, so it sounded pretty good I'd say.
Then we got one fnal own song and it was over.  Another nice afternoon at 't Blok. In July they have Anubis, which is to me one of the best progrock bands around at the moment. So if not away for work, holidays or UK Tech Fest I shall be back again as well.