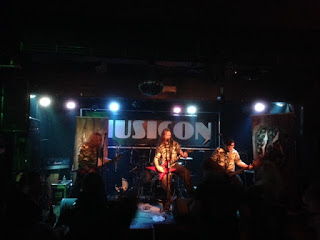 Last gig of the year to me, so why not make it a party. That is what Rene must have been thinking as he decided to commemorate his birthday with live music. As he loves his death metal, the menu was loud tonight. Good thing was that Musicon was packed and many faces from the triangle Nobel/Leiden, Baroeg/Rotterdam, Musicon itself decided to close the year in style.
Regarding the bands they all played well in different death metal ways. Deathhammer playing covers, Warmaster in camouflage shirts Bolt Thrower alike (as Rene explained to me). Neoceasar had the bad luck that their vocalist had to cancel due to family  circumstances. A big thumbs up for them not cancelling the show, but playing an instrumental set. New headliner therefore were Graceless showing they are one of the better death metal bands of the region.
In the end it was a very nice end of year do, now let's see if I can gather some friends for a New Year's drink in Musicon 5 January when the first metal and rock bands are on.
Heavy New Year to all.
Posted by erikprogtricolor at 15:09