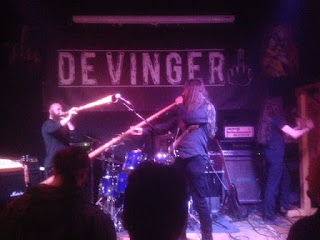 De Vinger moved some tima ago already from the centre to the old OLS/Bazart. In the eighties this was the metal venue in The Hague for dutch bands on tour. Last decades I have hardly been there, recently missing an interesting Stoner package I believe Textures touring their debut album was my last time here. This evening a package was booked with two Romanian bands and two local supports. All unknown to me on forehand a surf on the internet got my interest in the headliner and a bicycle ride through the snow looked more than justified for this evening with atmospheric metal.
Arriving in de Vinger four witches were tuning their instruments on stage. Their music is dark rock with rather minimalistic instrumental parts and a vocalist with a good voice. At times a Black Metal scream woud come out of a box to upp the heaviness. Some songs worked really well and moody while others passed me by incognito. Nice one to follow by Wurm. This band also were doomish. At the start the tall bassist grunted along the songs, while I preferred the later songs when the guitarist took over most vocals. Having three guitars did not mean a wall of sound, but again atmospheric doomy riffs. Good to see that local bands also got support from other local artists as I saw many faces around who I saw before on stage in Musicon or HPC. 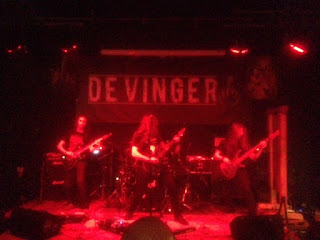 Then the evening turned Romanian with two bands I did not know before tonight. Dordeduh started their European tour in The Hague and Tranceatla is another project of almost the same band members. Transceatla played first and stated noone knows us as we just recorded but not yet released our first album. Well based upon what I saw last night I shall get this album upon it's release and many others present shall too I guess. The poster mentioned Progressive Doom/Death while I heard at times also similarities with bands that merged from Black Metal into a more Progressive style. Instrumentaly this band was great and the variations in the songs made this a very exciting set. The vocals mixed clean and harsh to good effect and I loved the double fingerpicking parts on guitar. Definitely a band to follow. 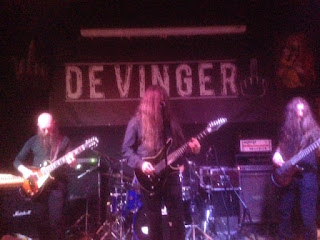 Dordeduh were headliner and they are holding ex-members of more famous Negura Bunget. Hello me it's me again the vocalist opened. This could also be said for bassist and drummer as only the second guitarist changed. What first stood out were the many different instruments on stage. The wooden guillotine turned out to be a percussion instrument, a horizontal harp (hammered dulcimer I learned from the CD) was played by the second guitarist and the opening contained two huge wooden horns. Containing three members of Tranceatla the band managed to keep the very high standard juts set up. This is one of those bands that due to the instrumenst alone is already a different spectacle to watch. Together with good musicianship this is a show that should be interesting to many music lovers in general. I know extreme vocals scare off many, but they are just a small part in this performance. As was the case the whole evening the music is all about the atmospheres and this band knows how to create some. The fact that they sing in Romanian does not hinder at all for that same reason. The music was black folky metal, but contained many headbanging parts at the same time. Playing the CD Dar da Duh now it can never come over as overwhelming as live on stage, but certainly sounds very interesting.

This tour is coming back to Holland on Monday when they play the Little Devil. I can recommend anyone in the area to go and see this. You get two moody dutch starters, followed by a top class double act of Romanian Atmospheric metal.
Posted by erikprogtricolor at 12:29