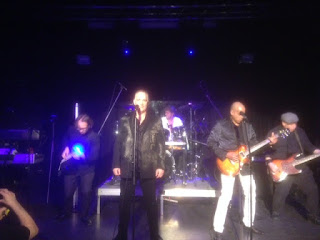 Two progressive rock bands in 't Blok whom I both discovered last year only when they released good albums. Once again organized by Progfrog. I knew of their existence since years, but only last December I first attended one of their shows with Martigan. Now I understood they put once a month a show on, organized by volunteers with the help of some sponsors. The atmosphere is really something different in here. When a barman did not recognize my face he asked if it was my first time in 't Blok and welcomed me. During the show I saw again the cheese-sausage-bitterballen platter passing by and the mood is very easy going. Later this year amongst others they already confirmed Hekz and Verbal Delirium, plus a festival in October. They also have some coverbands and when announcing today that Yesshows is selling fast I can inform readers who fear to miss out that next Saturday 18 February that band plays in my favorite venue Musicon. But I came to hear some music: Great solo's on keyborads and guitars preferably hidden in long epics. Well I got what I wanted. 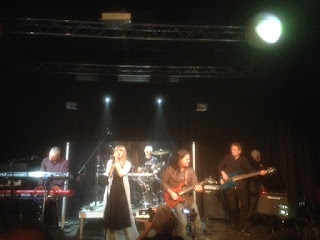 First on were The Far Meadow promoting their last album Given the Impossible. From the start most of my attention was drawn towards guitarist Denis Warren. The first songs he asked for minor changes in the sound and he moved his monitor one inch. When he felt comfortable he started treating us in many occassions on beautiful long solo's and proved himself the star of the band. For me his guitar could have been louder in the mix as I heard bass and keys over his solo's at times. The chance for him to shine came from the many long songs played. While I started with the star, it was not all glory. The vocalist disappointed somewhat. Not that her voice is bad, she can actually sing, but her presentation did not come out well on stage. Not long ago I saw Iamthemorning and that vocalist had a similar style. While that was a natural, I now had the impression that she was not all that comfortable being on a stage with some fifty old men watching her every move. It might have been just my impression, but it brought down the show a bit to me. We still had the musical parts to enjoy and Himalaya Flashmob and The Seamless Shirt were very strong finishers. 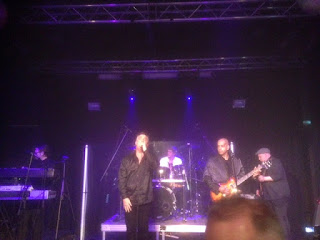 When after the break The Gift came on the difference was huge. Here was a band of five members who all looked at ease on stage and dressed up in black and white for the occassion. Especially the rhythm section, but actually the whole band looked so cool that they could also apply for playing mobster money collectors in a Guy Ritchie movie. But looks apart  I mentioned five members, as unfortunately David Lloyd could not join due to family circumstances. Losing a guitarist meant probably some adaptations in the set and show, but as I saw them for the first time I could not compare. During opener Quickening Pulse the keyboards moved portable (Nena, Voyager) and the band immediately made a nice and lively impact. Following this up by Sweeper of Dreams they set the tone for what would be an overwhelming prog show. Going through their three albums I did not know several songs. I liked the "pop"song Too Many Hands for being upbeat, The anti-war song from Awake and Dreaming was impressive. From the last album Why The Sea Is Salt, At Sea was dedicated to David Lloyd. The ballad The Tallest Tree was presented by keys and voclas only. As this song is about losing people vocalist Mike Morton looked touched at the the end relating the text to his own experiences. Coming at Mike Morton he had everything I just commented above as failing with The Far Meadow. He introduced the songs with a story about the contents or how it was written. When an unexpected tuning break came on he filled it without any issue talking or even telling a joke. I don't know if he is technically the best vocalist around, but he has stage presence and those are always the best. Actually the whole band deserves a big thumbs up, as this was a band performance that made it such a good show. Impression wise I was remembered about the first time I saw Credo live. Not leaving the stage for the encore we saw a pleased band ending their set. As the audience wanted more, they came back and gave us Sweeper Of Dreams again. This was introduced as their hardest rocking song which it is. Still I left any requested headbang attempts for last Friday at Dordeduh, now just enjoying this very good live band. Thanks to The Gift and all those who made this possible. In September they shall be back in Holland, surely trying to make that.
Posted by erikprogtricolor at 22:47