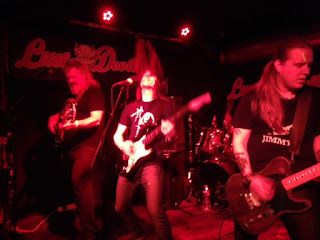 Last year I saw Mr. Kevin Riddles on stage. Not with his band, but helping out friends Brian and Claire Mear during the legendary Mearfest in the Borderline. I then already decided I would make an effort to see Tytan when playing the low countries. This week they are touring Europe with Italian support Fingernails commemorating 35 years in Rock. The Dutch gig went to Little Devil, so I went there as well. Tytan are a NWOBHM band that never made it to household name. 35 years ago I also did not buy their LP, as still at school my limited budget went mostly to the big names. I did get the re-release on CD years ago and Rough Justice sits well next so many hard yet melodic NWOBHM bands of the time. Those who think they never heard anything off Kevin are probably wrong. He played bass on one of the best NWOBHM albums ever made in Angel Witch's debut. Next to that he played with several other bands of the era during the years. This tour came at an interesting time as this week I learned they shall release their second album this May 26. Maybe this might result in a fast return, we shall see. 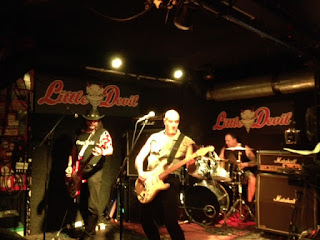 Opening the evening were Fingernails. This Italian band formed in 1981 already, but I must admit never hearing their name before. They turned out to be a trio, with the singer spotting a Motorhead patch on his jeans shirt and the bassist showing a huge Bomber tattoo. It came therefore as little surprise to hear them kicking away with Dirty Wheels, pretty much sounding like Motorhead. Both men sang and their voices also were more than a bit in the style of Lemmy. I liked their fast Rock and Roll, but not to an extend that I should get their albums in a rush. Nice openers though. 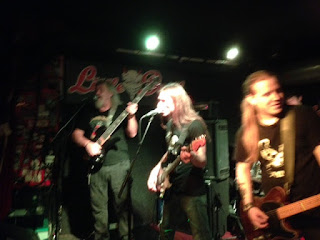 Tytan came on stage as a five man band. While they were comemorating 35 years in Rock it looked to me that some band members' parents had not even met at the time of releasing Blind Men and Fools. Yet I do not have much problems with it if with al respect "smaller" bands hold only one or two original members in the current line-up. It is all about the playing and the show and that turned out to be just fine this evening. Kicking of with Cold Bitch and Money for Love showed we had a tight band on stage . As there is a new album coming we also got two new songs  and one oldie Forever Gone that has been re-recorded for the new album. Especially the up-tempo instrumental was much to my liking. During the show we got almost the full Rough Justice album, so we could shout along with Liar! Blind Men and Fools. Dedicated to the ladies in the house we got Women on the Frontline and their best song might be closer Ballad of Edward Case, which is a fast monster indeed. Playing a bit over an hour we got a great show of a band who just made clear I shall get the new album Justice:Served! in May. Bands like Tytan deserve all our support. Let's face it without NWOBHM there would not be any Thrash, Black, Death or Tech metal either. This is how it all started to me over 35 years ago as well  and it is good to see the oldies still going strong. Thanks to Metal Mario for bringing this package to Holland and good luck for Tytan on their final shows this weekend.
Posted by erikprogtricolor at 12:46