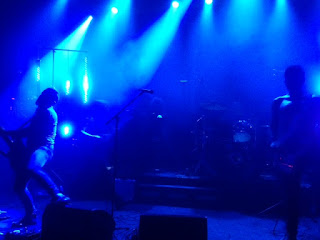 Obsidian Kingdom had the honour of opening ProgPower week this year with a small tour through Holland in the days before PPE kicks off. Andrew and Celine decided to travel one day earlier to Holland, stayed over at my place and began their progpower and cycling experience this same evening.  As I can not make it Friday, I did even consider the night the start of many good things progmetal coming to us this weekend. Last year Obsidian Kingdom were one of the positive surprises in Baarlo and now they opened for two bands nearing but just not reaching Progmetal territories. Consequence was that we started with the best show and then had to get through two to me new bands as an encore. Having both their albums I did not recognize song titles Obsidian Kingdom played. This also not helped by the lack of announcing any but one. The band themselves also seemed to have changed over the last year. I am sure that they had no girl on guitars last year and the keyboard player either had a severe haircut or was someone else as well. The music was pretty similar though. Again Obsidian Kingdom proved to come alive on stage. Off stage as well as at different moments both guitarists and the bass-player jumped off the stage into the audience with guitar necks coming awfully close to my nose. The set had songs from both albums, was heavier then the CD's and contained several nice build-ups to moody heavyness. Black Swan was the only announced song and is a nice dark ballad (YouTube has a clip) while the title track of their last album was avoided. Closing piece Away/Absent is the last song of the last album as well and was a fitting way to close the dynamic, yet short set this evening. 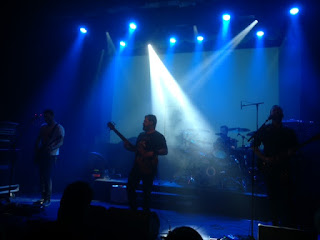 So after enjoying and recognizing the music of the first band it became time for new experiences. Any band opening with the line"We are Intronaut, from Los Angeles, California, USA"starts the match loosing 3-0 to me. Contrary to their USA we do have Geography at school, so cut the crap. Things did not get better when this turned out to be almost the only communication coming from the stage for the whole show. Instrumentally the songs had good bits, but I could not stop thinking that the vocals were more a handicap then a plus to this band. The aggressive voice lacked power, while some of the melodic multiple voices reminded me of The Eagles. People did like them, but I just could not get into them. The fact that half way I started to pick my phone and check Champions League scores says enough really. 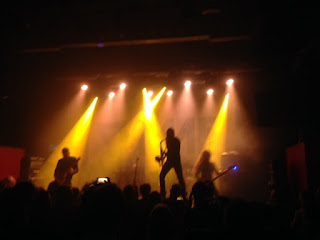 Closing band were Shining, the Norwegian one. I knew their name related to BlackJazz and saw some clips of them in the past. I do not know where blackjazz stands for, but I could not recognize any Black Metal, nor much Jazz (adding a saxophone does not make you Jazz). Shining played to me rawish Rock and Roll and did so very enthusiastically. After the introvert Musicians music of Intronaut, we now got a band willing to start a party. They succeeded rather good at doing so and in the end there even was a pit and lots of wild movements around us. I do not know what it is in the Norwegian expensive beer that   makes their progmetal bands wear black shirts, but on the looks department they could be Leprous' nephews. Musically Andrew called them at one stage Norway's Rammstein, while I tended more to Norway's The Offspring. So they did not play overly complex music, but they gave it a soul and a show. Not a band I would pick up a CD from straight after the show, but yes one I would go and see again if they pass in the area.

So overall a nice warming up to Progpower and I am looking very much forward to my Sadist Falafel and some new discoveries this weekend.