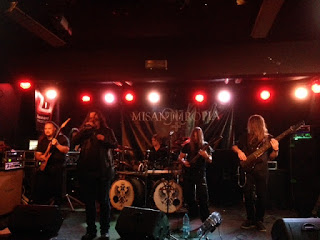 Those who know of this small tour probably think, there are two bands missing! And yes there are, so sorry Asatru and headliner Nattas, let me explain. Last Friday Josie came home for the week of Tiago's birthday, so it is family time and shows become plan B. I let Scream Bloody Scum pass and shall probably also not go to see HMM (a.o. Salem, Savage and RAM!!). At the same time this Sunday afternoon show, fell in a natural break in our weekend program. So instead of having a beer on the couch and watch some football I went to Musicon to see two bands before dinner.  It was good that I did, as yet again audience should have been much bigger given the package on stage. Headliners Nattas are from Sweden and bring members of Mercyful Fate and Grave along. One excuse  might be that nearby Baroeg had at the same time Onslaught and Mors Principium Est plus three playing. Summarizing I was going to have a Hertog Jan, while seeing the Dutch part of this tour in Misanthropia and Fenris. 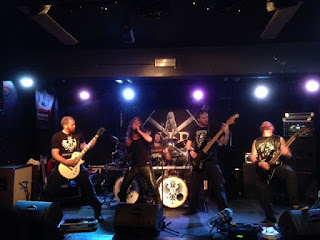 Misanthropia opened with some bombastic melodies and turned out to play rather accesible melodic Black Metal. Outstanding to me were the many melodic guitar solo's in their songs. Actually one of their guitarists looked while checking the ceiling when soloing, pretty much like a long haired Steve Rothery. Highlight of the show came in the closing song when the vocalist of Nattas joined and it became string party on stage. The two guitarists and keyboard player took up 8 string guitars and the bass player moved to a six string type. Doing the math that meant 30 strings on stage and yes they create a nice wall of sound. This together with the grunt and scream mix was a very impressive closer of their set. After a break Fenris came on. They play Viking metal, but with some Blackened overtones as well. Interesting is that they do have songs in English and Dutch language, but their lyrics are harder to follow than Dutch language metal godfathers Vandale. Also this band knew how to create a groove that gets you by the throat and takes you along their Doodenakkers. Time flew by again, which can only be a good sign.

So I ended the evening getting the last CD from both bands and arrived home just in time for a wonderfull dinner. I shall keep an eye on both bands tour schedules and hope that more people find their way back to Musicon. With too many empty houses recently we are digging our own graves.
Posted by erikprogtricolor at 20:26