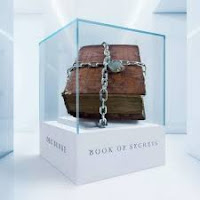 Dec Burke - Book of Secrets
Dec Burke is not as known as his releases would justify. He played in Darwin's Radio, Frost*, solo and last year released a debut with Audioplastik. Usually he plays prog at the rocking end with strong melodies and interesting guitar solo's. Comparing this CD with his previous solo work, we can state that this is his hard rock album. Most songs starting from a fast guitar riff and follow uptempo. Highlight on that end is the fast rocker Hate & Lies. Due to his typical voice the Dec Burke stamp is all over the album, but  as mentioned heavier than something we got used by from him. No Epic Prog anthem this time, simply eight rockers within lesss than 40 minutes. Being slightly different from his previous albums time shall tell how this one shall be remembered in his discography. Due to mixing by Lee Abraham and mastering by Karl Groom (Threshold) the album sounds more in your face than earlier solo albums. Nice surpise both the release as such and the hardrock mood. 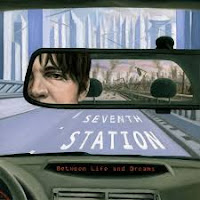 Seventh Station - Between Life and Dreams
This week's progmetal album, comes from international band Seventh Station. They are from Israel, Slovenia and the USA according to their FB page. The style of progmetal they play is the dramatic storytelling one. Other Israelian bands I know (Orphaned Land and Amaseffer) have to me the tendency of becoming too dramatic and that risk is here also lurking around the corner. They play very varied styles and also the vocls pass through a wide range. At the more aggresssive biting moments I remember Linear Sphere at times. Definitely not an easy album to absorb, I hesitate to give any final ordeal. First impressions are of an impressive album that might be willing too much at times. Still with the globalisation of Metal music one can only be happy with a release from the slightly under represented countries of Israel and Slovenia. Curious to see if they ever make it to Progpower (it's that time of the year after all). 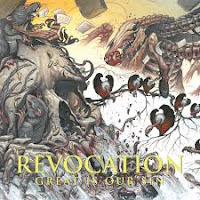 Revocation - Great is Our Sin
Moving forward on the scale of heavyness we arrive at this Technical Death Metal combo. Revocation already release their fifth full album here, but are a new name to me. Mainly due to several positive reviews my interest was raised. Their sound balances between Death Metal. Thrash and Progmetal (Mastodon style). As from opener Arbiters of the Apocalypse this album takes you on a trip of fast licks and heavy riffs. While the music is still headbangable, the technicality stands out. The vocals fit the music well and remain easy to understand.  For those who only accept cleaner metal vocalists, the album still has one song on offer that should be heard by all. The Exaltation is a monster of a heavy instrumental with a guest solo by none other than Marty Friedman. Later this month Revocation is part of a package headlined by Obscura, playing Patronaat as well. Based upon this album I guess they are strong contender for winner of the day. I shall make sure to check that out for myself.
Posted by erikprogtricolor at 18:44