A Friday evening and THHMA brings us three Belgian Heavy Metal bands in Musicon. Opener was Drakkar. A band coming from the eighties but unknown to me. Their Heavy Metal sounded nice and the biggest atraction came from their pretty energetic vocalist. He decided to leave the stage for what it was and performed the full show on the floor, behind the bar and around visitors  necks. I thought this was just the right thing to do as it brought smiles (or frowned eyebrows at some) and good atmosphere. The music was traditional Heavy Metal and sounding fine. 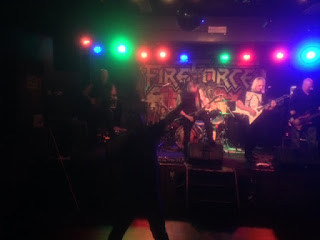 Next up were Guilty as Charged. I immediately think of Culprit when hearing that name, but unfortunately that great band from 30 years ago was not covered or set as an example. This band played more Thrashy metal and at times the vocalist came awfully close to James Hatfield. This brings me to my main impression and tip for the band. As they came after the extremely participative Drakkar show, they were not going to top that live performance. Still their music sounded great, but lacked for me points of recognition. With a voice like that in the band for me the obvious would be to add a cover from Metallica early in the set and the attention will be grasped better. If they need further tips "The Four Horsemen" would in my view blend in nicely in their set. 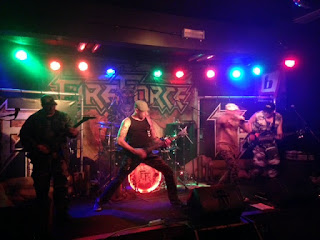 Fireforce were headlining and had a nicely decorated stage set up. A large Deathbringer banner on the back and some huge logo's before the amplifiers, with sandbags and military outfits they made their point. That point is that Fireforce play Combat Power Metal. Well whatever the name they played a nice set of metal anthems. Two years ago I saw them playing at R-Mine festival and already liked their set. As I do not know their CD's I liked at the time their cover of Battle Hymns. After the show we spoke with the vocalist and understood that at the time they had only one album, so a cover was needed to fill the show. Still for me a good cover works with slightly lesser known bands. (earlier this year Absolva took Musicon by a storm, but when they played Fear of the Dark the roof came off) Even without a cover Fireforce convinced and played this straight forward metal style that goes down so well over a beer.

So another entertaining evening in Musicon and THHMA keeps bringing us good bands. Of course the evening deserved more people showing up, but that is old news. Only by showing up chances of more bands interested to play The Hague or returning during next tour shall increase. I keep on trying to do my part and had a great time doing so.