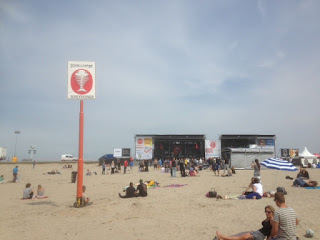 Schollenpop is the festival closest to my home and usually is guitar orientated. Not necessarily heavy rock, but normally acceptable music and some hardrock or metal inbetween. It is always held at the beach of Duindorp on the first Saturday of August. Problem with that is that it falls mid school holidays and the past 5(?) years I missed it due to family holidays at the same time. This year we went early and as a bonus they announced particpation of none other than Bay Area Thrashers Death Angel on the main stage. To increase the fun some weeks ago it became clear that The Hague Heavy Metal Alliance would organize a metal stage as well, which basically meant that we would have a full day of Heavy Metal in the sun, on the beach, for free. All ingredients therefore for becoming the best Schollenpop ever and so it was. 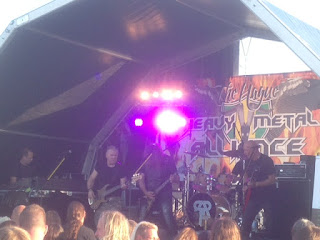 THHMA stage brought us a wide variety of metal-hard rock and seeing these bands in this setting was so good, which made me like all shows. Starting the day were two heaviest bands of the day in local band Rages of Sin and from Belgium Carnation. Death Metal played well and shocking the slowly arriving festival visitors not that much into metal (as the stage was next to the entrance of the festival). The Stiff played punkrock which suited me slightly less. Locals Rebelstar brought us melodic hard rock played continuously with no time lost on endless speeches a risk of that genre. Distillator from the East of Holand was a new name to me and brought us very good thrash metal to warm up for the main stage headliners. Closing bands were 80's heavy metal and to me the two best shows on this stage indeed. Sad Iron played fast and furious and is actually a very good band who good have been bigger in the eighties. Martyr I saw several times recently and they just know how to make a party. Maybe their reputation goes around outside metal circles as well, since main stage band Novastar demanded no overlap and we got a large delay before Martyr got started (being forced to listen to part of Novastar, they were probably right as their boring rock would be completely blown away by Martyr). Martyr playing us into the dark and untill there were more people on their stage than on the beach. Great closer of the THHMA stage and what a succes this stage was. Being most part of the day the crowdiest place on the beach. A wide variety of styles and good reactions, with sandy moshpits to ensure sore calves the next day. Of course the fact that Death Angel was on the bill added many metal fans, but next year's stage has already been confirmed and in my view justifies also another big metal name on the main stage. 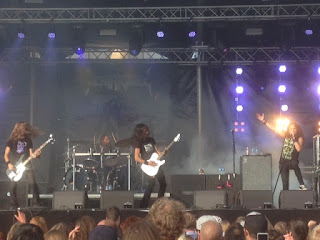 And then there was Death Angel as well. I saw them several times in the past as both Death Angel or The Organization. They always know how to get the crowd going and to play very tight. Due to the fact that it was a long thirsty day and I went to another show last Monday I do not recall their full setlist (also not knowing all songtitles admitted) I remember that they opened with Seemingly Endless Time and closed with Mistress of Pain. Inbetween that we got one hour of solid Bay Area Thrash Metal. Being experienced enough they welcomed all people who never saw them before and explained their long history of shows in Holland. Having had their first show abroad ever at Dynamo Open Air, it looked honest when they stated liking Holland. Those who know the band were with many as well and the atmosphere was good. Just a great show, which might  drive me towards their thrashumentary, which has been released after many years in the making. 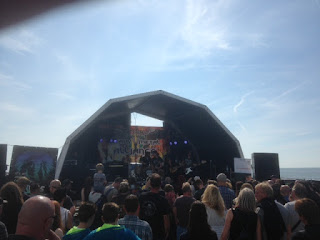 So Schollenpop was to me the best edition ever, on this great location with as a bonus a sunny afternoon/evening. I do hope that my suggestion hereabove becomes true and next year another eighties metal giant plays Schollenpop next to a full day at THHMA stage. I might start trying to plan my holidays with more care if this will be the case.
Posted by erikprogtricolor at 22:09