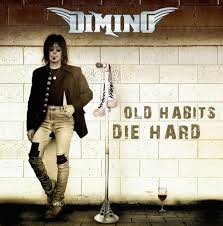 Frank Dimino was vocalist of Angel, one of the best rockbands in the seventies. I remember playing for a Long Time cards with  Hans and Magchiel listening to their Classic "Live Without a Net" Over and Over (both not so great puns intended). This live recording can stand next to great live albums of that time by UFO, Thin Lizzy or Scorpions. In opener The Tower it also contained one of the best Rock songs written ever. Frank Dimino had a remarkable voice which gave Angel this easy recognizable sound (well next to some Keys from a certain Mr. Giuffria). The band dismantled in the early eighties and returned late nineties to release "In the Beginning". Actually I was still hoping to see Angel one day live. Last time they played within 2000 km from my home was at Bang Your Head I believe some ten years ago. That show was with Steve Blaze of Lillian Axe taking the honors on guitar, but I missed it. Now I still did not give up, as almost all great bands from the past reform and tour. Unfortunately rare news on Angel (AOR magazine) told me they are all busy on other careers and chances for a tour are slim at the most and visiting Europe somewhere below zero.

And then Aardschok suddenly had an interview with Frank Dimino about his new (and first) solo album. The interview started with an obligatory introduction for anyone under 45 years, but the fact that a solo album was released through Frontiers got my interest. After reading about guest participations of amongst others Punky Meadows, Oz Fox, Eddie Ojeda and Jeff Duncan I placed an order in the blind. Pleased to inform that my gut feeling was right as I can say that this is one of the best albums in the melodic rock genre (to be) released this year. The CD contains exactly what we could hope for. Some midtempo melodic songs, some ballads and some (for Angel standards) very fast rockers. Frank's voice is still very strong (which makes sense for the vocal coaching classes he gives nowadays) My favorite songs are in the fast area with Mad as Hell and The Quest. Next to these fast rockers the one song that sounds most like old Angel is very good as well: I Can't Stop Loving You.

Anyone into Melodic Rock should get this album. It has the variation needed, great perfromances and well getting a surprise release from a hero of the past basically deserves a purchase at all times. Being released by Frontiers who knows they get him over for the Frontiers festival. A get together of old bands I did not manage to visit yet, but might as well if Frank Dimino makes it. Until then Old Habits Never Die shall do.