For those who know which Tour this is the question "where are Audrey Horne?"might raise, so let me go for the long intro. After last Friday's succesful night of Belgian Metal in Musicon, I sent an email around on Monday if anyone wanted to join me to Don Airey in de Boerderij. After receiving several underwhelming replies, I looked for alternatives and proposed one night earlier the tour of Audrey Horne / Dead Lord / Dead City Ruins in Leiden. As much as I might like all the songs Don Airey would play (Rainbow, Sabbath, Purple or Gary Moore) it would still feel like a coverband. Apart from that I would be seeing great vocalist Carl Sentence playing covers and not sing any Persian Risk songs. Problem was that although the descriptions of the three bands playing Leiden looked good, I did not really know them. In comes internet and after some streaming it turned out that all three bands might be very good live. So as I was going alone the choice was up to me and I choose originals. Then there was another issue as there was serious competition on the Thursday from the football front. Holland was playing a crucial qualification match against Iceland (?!?) and needed a win. Admitted I was in doubt, especially since Friday morning I had some rather serious calls and meetings at work waiting for me. In my mind also a recent occassion was bothering me. For work I travel crazy places and some weeks ago I was sitting on Dubai airport when someone asked if I would reply a questionnaire on my experience in the Emirates. Not bothered to tell the locals some truths I agreed and when the question came up which religion I had, I let out the obligatory none. This while I was reading at that very moment the biography of Dee Snider "Shut up and give me the Mic". Maybe my fever and 45 degrees did not make me react fast and adequate, but the only correct answer to what my religion is can be : I Believe in Rock and Roll!!\m/ As the choice looked hard, in the end I followed the golden rule  Music always beats football. Hardly ever before was this rule being proven so right. Gebr. de Nobel it was, but only the two opening bands. So sorry Audrey Horne, the streaming sounded nice and the muppet clips looked great, but responsibility is a bitch so an early departure it was. Arriving at the still closed Gebr. I feared a rather quiet evening (football?), as some 15 people gathered before the doors opened. Luckily that improved well over the next 45 minutes. After entering a sense of panic caught me and many others as there was a problem with the beer taps. Ten minutes late crates came to the rescue and when the first show started the taps started flowing as well. On came Dead City Ruins. This Australian band moved to Europe in March, trying to pick up as many shows as possible and live at peoples homes and in bars. A band which such attitude one can only support and promote. This was made easy by their show and music. Seventies hard rock, double guitars, groove, a vocalist that looked like Bruce Dickinson with evil eyes, lots of hair and great songs. Australian bands  already showed Progpower how to build a show (Voyager, Alarum, Aeons of Horus, Alchemist) and these guys were not different. As I got my hand full of beer I did not picture the vocalist singing from the bar, nor the guitarist jumping through the hall. A very good show and I do wish them luck in making it at the old continent. Playing their Tour Edition CD now I can only say check  them out when you can. 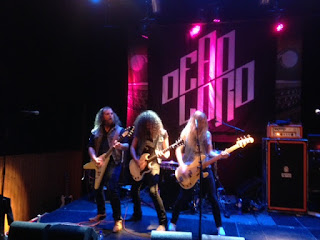 Next on were co-headliner Dead Lord. Starting of with the line "This is Farewell" one might fear a short set, but they played over an hour. Their reference is pretty obvious from the first twin guitar melodies. There is nothing wrong in following the style of the best band ever coming out of Ireland (no, that is not U2) when it is done with such class. Vocalist Hakim has a warm deep voice as well and the constant guitar solo battles packed in songs that seem classics to be, guaranteed a show to remember. The hour flew by as I saw only highlights. Getting both ther CD's after the show I could see they played a mix of both albums. I just can not see these Swedes not going very far with this mentality and songs. The guitar solo's, the banging, the smoking amp, the spontanity coming off stage and mainly the songs should bring them on the radar of everyone into Classic Hard Rock. The next song is about tools and organs showed some dry humor to close the set with fast rocker Hammer To The Heart. 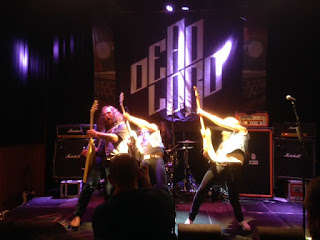 I found myself two new bands to follow and renewed proof that Metal should rule Football always. While I had a great time banging my neck, Holland lost to Iceland. Playing without a defense and substituting one crappy coach by another obviously did not work. I even learned something on Nuclear waste deposits in Onkalo on the night. Apologies to Audrey Horne for leaving early, see you next time.
Posted by erikprogtricolor at 13:03