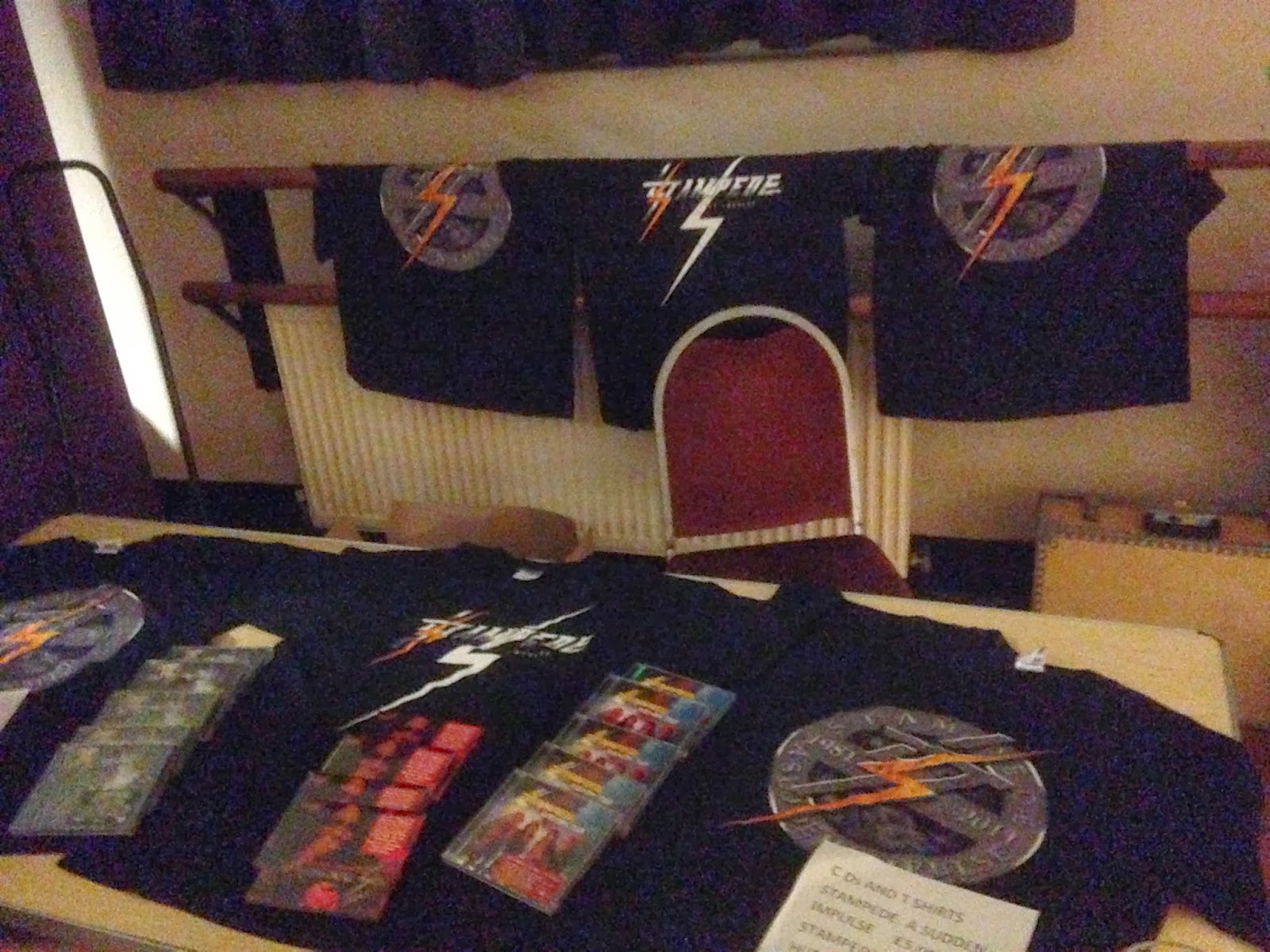 STAMPEDE!!! Over 30 years after getting very much into their LP Hurricane Town, swiftly followed by  their debut Official Bootleg, I had a chance to see them live. It was not that obvious and I have to admit that internet brings us great things too. So John Tucker wrote this book Suzie smiled... about NWOBHM, which I found through the internet and is a great read. We exchanged some emails and I hope to meet him one day at Progpower where he also passes every now and then. Checking his site I saw that he rated Soldier best album of 2013, so I ordered a copy in the blind. In comes Miles Goodman, guitarist of Soldier who appreciated some feedback from me on why I ordered their album. While explaining and mentioning my favorites Stampede he pointed me in the direction of Hatfield. Without confirmations all around in came Deano from The Rock Den and the welcome and replies I received were sensational, so off I went to Hatfield. There is no other band I like to this level so long and never saw playing live. The great thing was that seeing them the first time I now understand Stampede is a band to see playing live. The songs even gain more on stage and I already know that last night entered my  list of shows I will never forget. Backside is that this year I plan to go to many shows, but I already saw the best show of 2014. 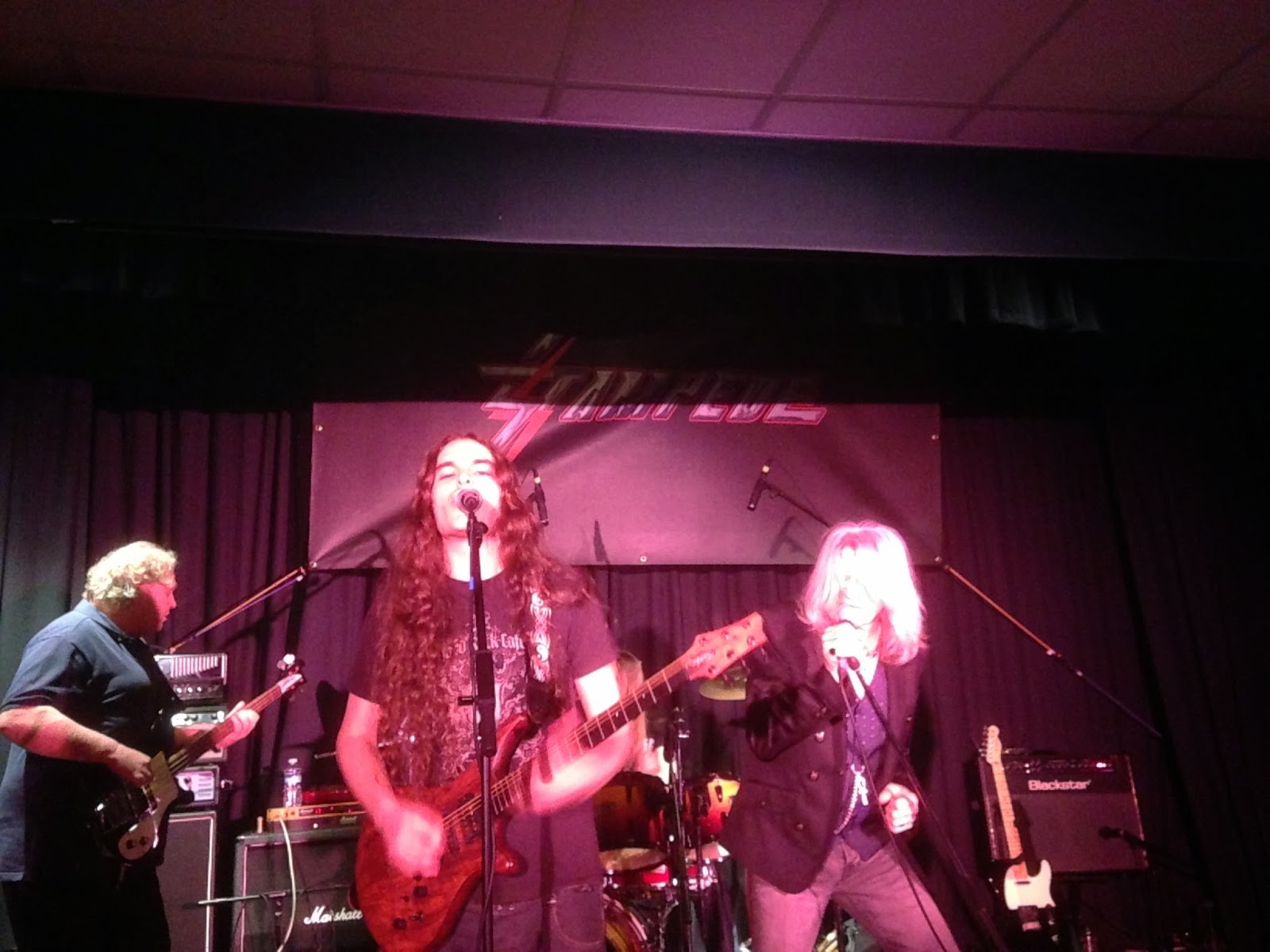 But first things first and those were opening acts Toledo Steel and local band Neverworld. Both were pretty good and the Maidenish Toledo Steel (with a surpise cover in Tooth & Nail) made me buy their EP afterwards, while Neverworld sounded promising and shall release an album soon, which I shall check out and possibly order hereafter. Both promising bands showing that British bands usually have a more natural stage performance than continental ones. Mentioning prices I did have the expensive HMH in mind where Dream Theater played last Monday. The money you spend there on a locker gets you a Stampede CD in Hatfield. Beer was also fairly priced (half HMH again) and with T-shirts at a fiver I got both. 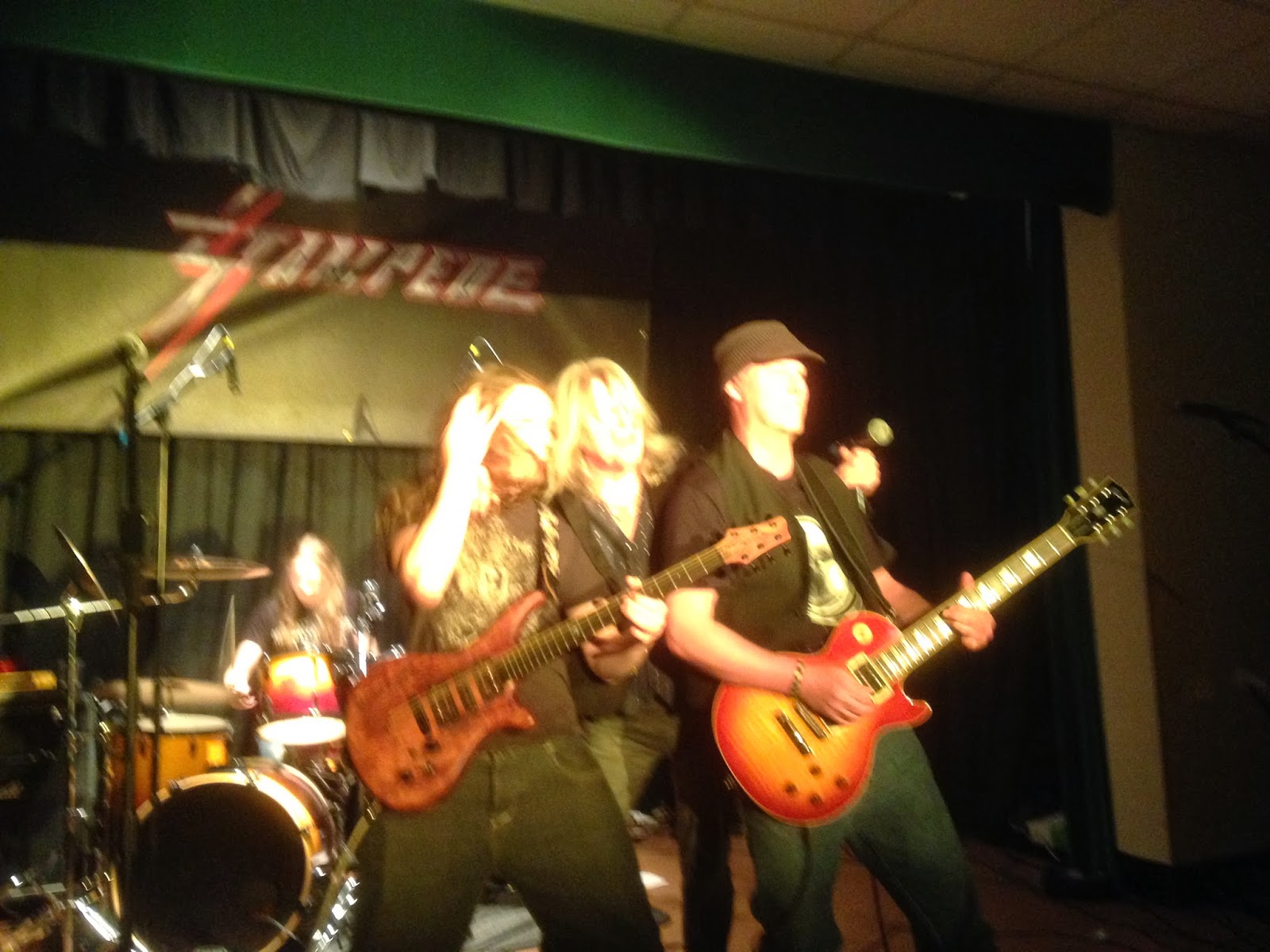 Being welcomed very friendly by Deano, the crew and some of the frequent Rock Den visitors, I got perfectly in the mood to see Stampede live. The band consisted of the Sudden Impulse set-up with drummer Ted? coming from Reuben Archer's solo band. Colin Bond kicked of bassing us into Shadows of the Night. After follower Having Fun I could see that all music would be at top level today. For those who pointed that Laurence Archer is no longer there, no need to worry. Chris Clowsey and Rob Wolverson take the honors as they did on the A Sudden Impulse album. While Chris soloed occassionaly main parts were taken by Rob who proved to be the next guitar hero, far too little people have heard off. His melodic soloing was so strong that I wondered why I did not recognize that to this effect on the last CD or Reuben's solo album. Mentioning  Reuben Archer it was a pleasure seeing and hearing him live. Although he did halfway apologize for a bad throat (it's that time of the year suppose) I found his voice still showing all the character he has in the studio as well. 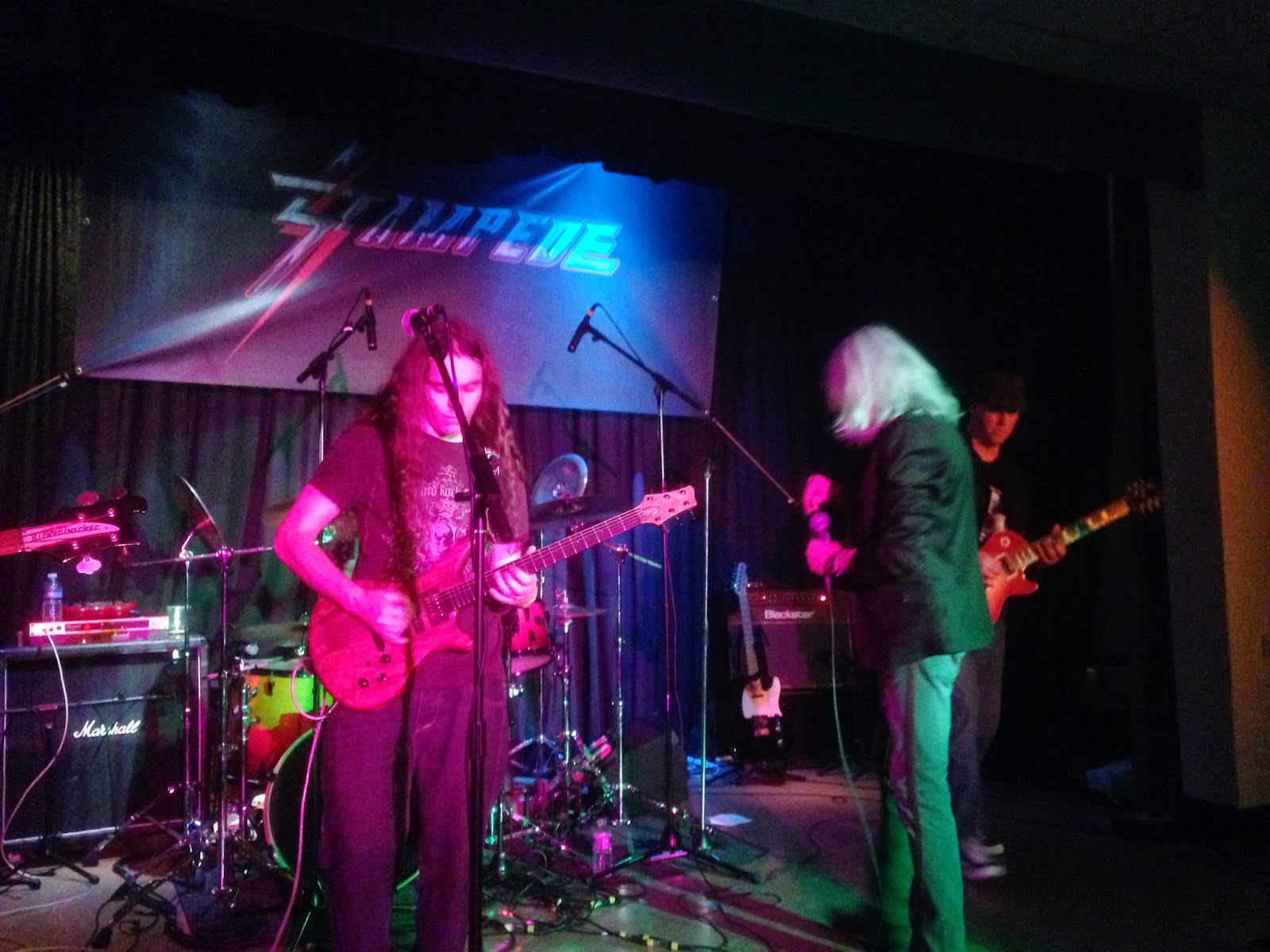 Hurricane Town was the album that got me into Stampede and I played over and over again. The setlist however was built around the last album A Sudden Impulse and their debut the Live Bootleg. This did not harm the show at all, since the newer songs in a live version showed to be off the same level as HT. Highlights? hard to say although Hurricane Town itself is a Classic, now unfortunately still relevant in rainy UK winters. Their last "hit" Send me Down an Angel was definitely a highlight and my throat is still recovering from my requests to Shine the Light on Me. As I know all their songs I did in reality go from one highlight to another and maybe a last extra mention is needed for closures Moving On and The Runner, speaking about ending with a blast. 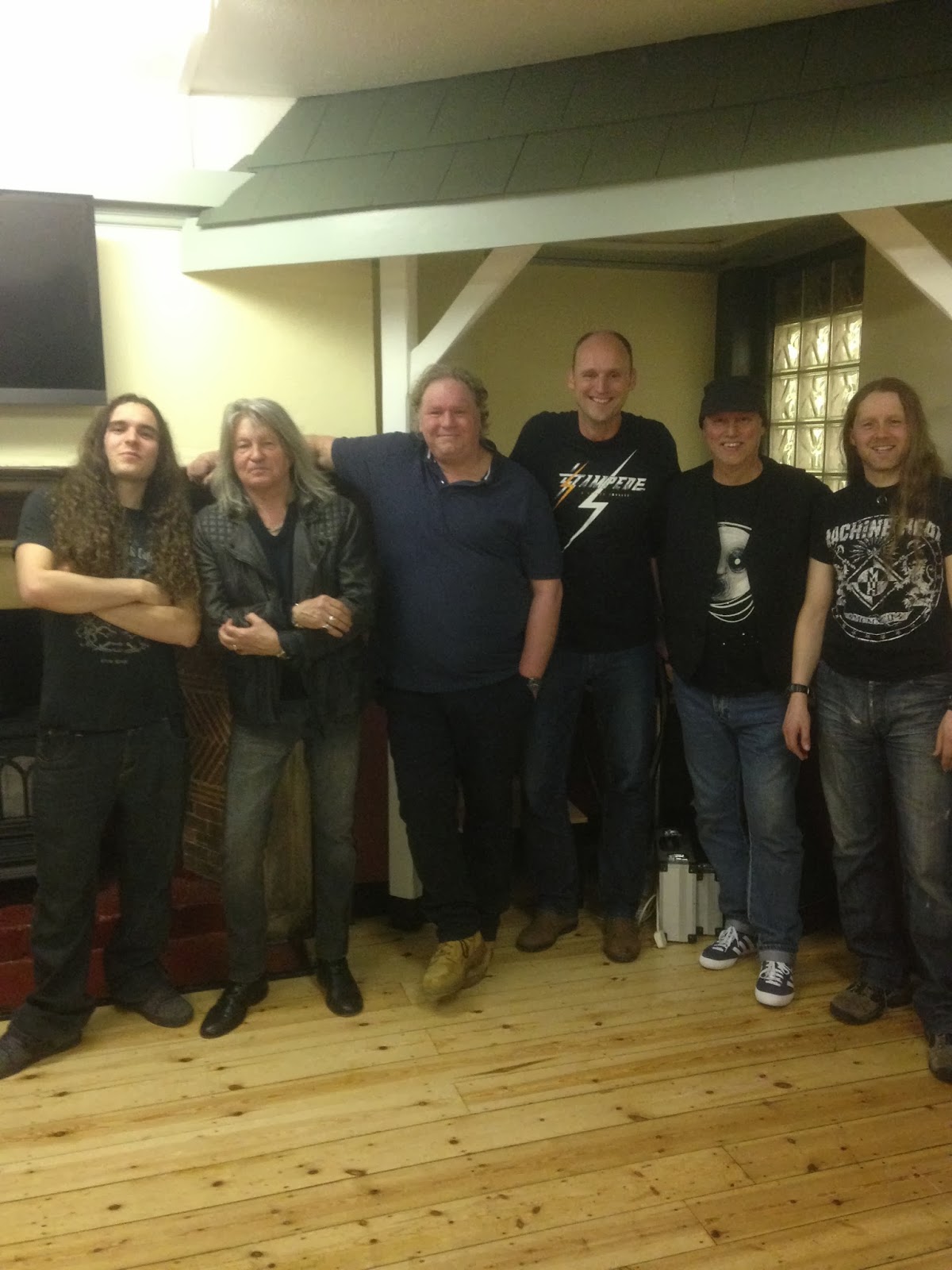 What a show and what a day. Defintely worth the trip and I shall make an effort to see Reuben Archer performing his solo album as well. After the show when I wanted to thank Deano for making this possible he proposed to bring me to the band. It was very nice to see their surprises that I came from Holland to see them. As I explained to several people I belive that bands deserve more support than football teams. While the latter are followed thousands of kilometers by thousands of fans when playing abroad, Bands don't get this for small club shows. To me Stampede was the show missing and I am very pleased to have corrected that. By doing so I met a nice place for metal shows, met really nice people and already start planning a return to Hatfield for Power & Glory Festival in August. Massive thanks to Deano, Miles Goodman and I guess John Tucker as well. Apart from that to Stampede for their show, Live they are even better!! When the world was supposed to come to an end on Ragnarok I saw that life can even get better.