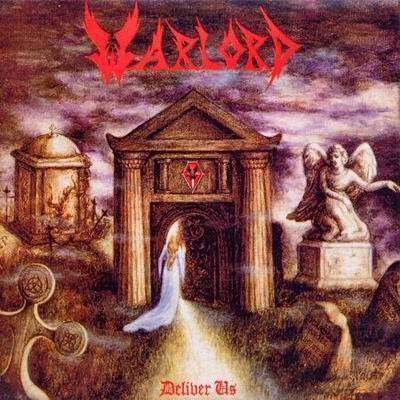 Recently I have been buying new CD's from bands I already liked around 30 years ago. In some cases the bands never disappeared, in many cases they reformed now that the climate for Heavy Metal has improved. When buying directly from the band through their website I sometimes add a classic that or I knew but never had or had in slightly different form. Here comes Warlord, I bought their 2013 recommended release The Holy Emprie and decided to add Deliver Us, the aumented Classic EP. I never had this EP, but owned the Video Soundtrack and the Cannons of Destruction have begun... The later LP I picked up pretty frequent over the years when I had one of those days to play old LP's instead of CD's.

The band at the time worked under nicknames and only now I found out guitaris Destroyer and Bass player The Raven were one and the same band leader William J. Tsamis. Most people shall know drummer Thunder Child, better known as Mark Zonder from Fates Warning fame. Vocals were by Damien King or Jack Rucker (which in Dutch is not a heavy name indeed, so the namechange here makes all sense)

Warlord played even 30 years ago already their own version of US/Power/True or whatever metal. Instrumentally they were high class and the vocals were allright, slightly high and not the most powerfull but fitting good to the songs. The strange thing was that being technical they were never really heavy for heavy's sake. Maybe the bass was not loud enough, or the mix did not help, but even their new album can immediately be recognized as Warlord. Most important are the songs and I think they stood the test of time, because they are still different. From Deliver Us 4 songs appeared on the live LP, so I got three new songs, with Mrs. Victoria being the heaviest and best one for me. The four Classics are all just great and make part of the cannon of Heavy Metal, or songs that everyone should know and be able to shout along when played in a bar or live.
Deliver Us from Evil, Child of the Damned and Lucifer's Hammer are still very good indeed as I noticed with the new listen. Their absolute highlight to me is the song Black Mass, catchy, heavy and not leaving my head the coming weeks after hearing it again.

So now I can pick up the old LP again, and find that there are so many bands I love and can fall back upon over and over again. Warlord shall be headlining Headbangers Open Air thsi Summer and they informed on their facebook that soon more dates shall be announced. Fingers crossed while the demons danced and drank from the chalice they shared.
Posted by erikprogtricolor at 16:36