Sometimes you wonder why you have seen certain bands a zillion times live and others hardly or not even once. Saxon fall to me in the latter category (hardly with only one festival show in my Brazilian years) and I now they played Haarlem last Saturday I started wondering back where things went wrong. Saxon was definitely one of the first heavy bands I got into with Strong Arm of the Law being their first LP I bought, so 1981 I knew them. Sergio showed his still kept ticket from their 1981 Amsterdam show, but I was not travelling to Amsterdam for a show just like that at the time. During their first years (The Carrere years: get this CD 7  LP’s for the price of one CD) they wrote a long list of metal Classics, which stuck forever as I found out shouting along.

Than why didn’t I see them? The last years they usually played in the east of Holland only and sold out their shows, while I do not get advance tickets anymore, did not help. I also think they had in the eighties/nineties a period of not playing Holland at all, but I might be wrong here.  Anyway, while I am in mid-life-crisis-back to-NWOBHM mood, gained for Sinterklaas the biography Never Surrender (or nearly looking pretty) there could not have been a better fitting show than the one Saxon gave us in Haarlem. Saxon still Rocks, heavy in your face, no bullshitting around and presenting a long list of Heavy Metal Classics. 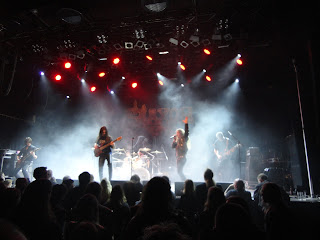 First we were warmed up by COPUK, or Crimes of Passion., a sympathetic band playing their  songs. Very nice was they expressed humility (we were not there to see them, but they just wanted to warm up for Saxon) But by playing a short set of good songs, with decent guitar work and good vocals, slowly they won over more people and three of us got  their CD after the show. Support your good support bands.

After being warmed up it was waiting for Saxon. We were with six of us, all eager to bring back best memories that go along with timeless classics and the Patronaat by now filled up decently, although not packed.  Interesting fact is that the average age was impacted upwards, by people like us who lived the early years. During the show I noticed some fans around their early thirties getting to know the songs obviously much later, were not even bothered to shut up and bang their head. So anyone who can not give a decent reply to the mighty opening line: Where were you in 79, when the dam began to burst? , might just not fully get the historic value of Saxon. Well I did and from opener Heavy Metal Thunder to closer Denim and Leather and encore Princess of the Night I had a smile on my face a bang in my neck and a throat going soar over time. Very entertaining indeed and their classic presentation, makes you realize why we got into Heavy Metal to start with. 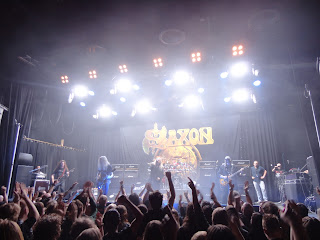 Now I write my review in Dubai, where I am attending a STEEL conference. How Saxon is that?? Well not at all. Some years ago Saxon were supposed to play the Desert Rock Festival here.  They did not since someone read the lyrics of Crusader which obviously is about the Crusades and holds the line "Spilling their blood on the sand" This would be too much of an insult to the audience. So while I am allowed to enter the Emirates for work,  Saxon were not. But the Band played on and I do hope that soon I can fill my head with some more of their Heavy Metal Thunder. While at it I might get the similar titled DVD just as well.
Posted by erikprogtricolor at 05:28