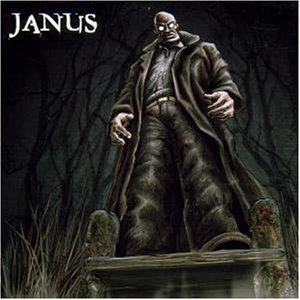 And now for something completely different.: Janus. We have here a mix of Gothic, Industrial some female vocals and some heavy guitars. Still I like this release from 2000 a lot and on a day like today: when autumn switches to winter, predictions for tomorrow's trainride to work are hellish and fevers are running through the house nothing beats a depressive concept album in the German language.

Sometimes a language mixes really nice with certain music. In Brazil I discovered some bands who told full books in each song and instruments were only background and this made sense. Some Scandinavian progressive rock (Landberk to name but one) sounds very nice with the melancholy all around. And coming to German this style of music fits the music perfectly. With songtitels like Kommt Herunter, Unter dem Eis, Klotz am Bein the atmosphere is to me already described. For those of you who don't master the German language, just learn Dutch. On a bad day you end up understanding Deutsch.

The story is about two brothers falling in love with the same girl Veronica ( In Dutch a television channel in German a prostitute, so be careful when taking the language course tip from above serious) There is murder there are flashbacks, there is lack of understanding and quite some attention  needed by me to follow the storyline. Does not really matter if I miss out on details, since the music is what counts. Ok the gothic and industrial parts are pretty dominant, but what makes this such a good album, is the occassional outburst of heavy guitars. Trying to describe the CD I am finding that probably what I like most about it is the fact that I have nothing similar to this.

After this release I bought another CD by Janus, which was nice enough but not meeting their masterpiece, which I can only assume this is. Than we come to yet again the same final question. When the bombastic Rammstein (I only know some clips and have no CD's) can move Fortarock festival from a 7000 people venue to a Football stadium next year, why is this much better band not even able to fill a small club in Holland and hard to trace on the internet. Verdammter Geschmack der Massen.