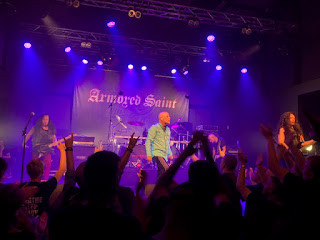 Next week it is Dynamo Metal Fest and I can't make it. To my luck two of the best bands of the line up decided to play the north of Holland a week before as well. Now Armored Saint made it to my favorite live show last year and as their last shows in Holland were in the middle of summer school holidays, Magchiel missed them. Doing the math 1+1 is still 2 and off we went all the way to Drachten making our Iduna debut. I say all the way, but Holland is not that big as an average stage in the Tour de France might be as far. Sunday show scheduled at the afternoon, just as we like it. Arriving at Iduna it turned out to be in an industrial area with as bonus a foodtruck outside. Not sure how many fit in, but turnout was good. So let the Saint March in. 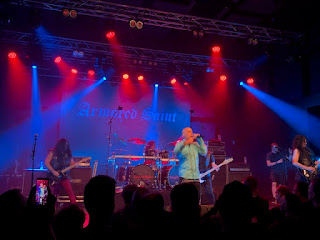 Armored Saint plays Heavy Metal as we like it. Good songs and full of double or solo guitars spicing matters up. John Bush remains for me one of the best vocalists around and we were in for a party trip through their albums. Opening with Raising Fear and Can U Deliver and our necks were warmed up. Seeing Armored Saint means you get an overview of all their albums, but with the occasional surprise thrown in. This afternoon Muscle Memory (from the very strong Win Hands Down album) and Seducer were nice inclusions. We tried loosing our voice for good during Reign of Fire already making a start at that during my favorite Saint song Last Train Home. Every time this song is played live I wonder why that song never turned into a global hit. I mean you can even dance on it if you like. Meanwhile John glued all songs together where even a rather far sought speech turned our female football squad into potential seducers. He did his homework as he knew he was in the north of the Netherlands and the phrase "Make some F%$king noise for me Drachten" came out well. Strangely they were announced as support, but luckily they got some 70 minutes time for us. So when the March of the Saint was over we knew it was the end of yet another amazing Saint gig. Armored Saint always deliver. 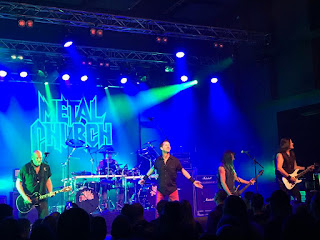 A short break outside, gave time to catch up with Willem as well. Metal Church headlining today and I wandered back in time. I think the only time I saw them live was at Dynamo Open Air 1991 when they closed the day also after Armored Saint played earlier. Some years ago I was supposed to see them on their XI tour in Dynamo, but when Meshiaak pulled out I decided not to train down. In 91 Mike Howe was vocalist and he is back for two albums now. I must say that Damned If You Do, their last album is very strong indeed so curious what they would bring live. Opening with the title track of the last album and thereafter a song from XI showed the present is pretty OK for them. Mike Howe in red trousers and short haired jumping on the stage reminded me a bit of Graham Bonnett. The band was good and also they presented a trip through time. One comment form my side would be that they put very little focus on their start. I mean their self titled debut album from 1985  was what got us into the band. Only Beyond the Black was played and I could do with some Gods of Wrath or Battalions as well. That there was a certain focus on Mike Howe albums is Ok, but then I would love to see Anthem to the Estranged once live. Here I see that Watch the Children Pray cannot be skipped either and we should not overdose on calmness. Anyway nothing to complain overall as it was great to see Metal Church again on stage after so many years. While more up front during Armored Saint I thought by limited audience participation that most probably came for Metal Church. It turned out that also here we slowly had to walk more forward as the number of people chatting non-stop, catching up and getting pissed seemed to outnumber those who came to see the shows this afternoon. Yet we might be back for Holland Heavy in November as this was one successful Sunday afternoon in Drachten. Car it was so no need to look for Last Trains Home. 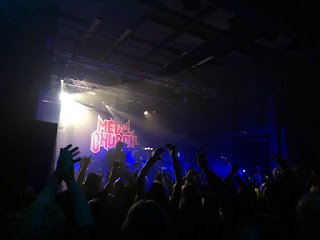