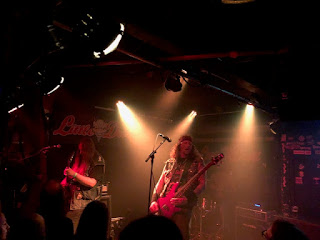 11 May was again one of those days where options were plenty. Doom was over Tilburg while Graveland in the East of Holland had some big names in extreme metal and Hardrock was taking over Baroeg  with Blokhut live. Now Frank is getting bands to play at LDDD and last week we traveled together to Mark Boals where he explained that the Dutch bands at Blokhut play everywhere in Holland this year anyway. Finally Iron Void was on the bill and their 2018 album Excalibur blew me away. So doom it was for me. Actually with the week I had with very disappointing office closing affairs and football deceptions doom would fit best with my mood. So I wanted some doom soundtrack guiding my state of mind and misery I got, but more on that later. 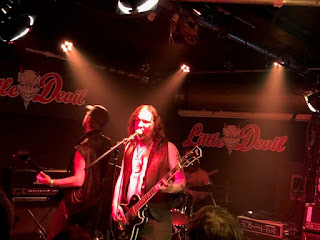 Upon arrival in sunny Tilburg all still looked pretty good. Thronehammer were halfway their set when I entered Little Devil. This band was musically somewhat one-sided, but the voice made the difference. Closing song Thronehammer actually turned in some sort of doom party with fists in the air and a pretty strong vocal addition from the audience. Nice opener they were and hereafter Finnish Cardinal's Folly came on. For me they were the opposite of Thronehammer in a way that their music was more working with changing tempos, but the voice seemed a bit flat. Again the best was saved for last when the guitarist and bassist jumped of the stage and played in the already tiny space between bar and venue. Actually throughout the day it was good that half the fans stayed outside or in the bar area making the venue accessible at all times. Hereafter the volume, speed and show would up a few notches when Death Doom combo the Drowning from the UK hit the stage.  This was a great live band and the fast guitar solo's were not very doom to me, but very welcome indeed. Actually I told Frank already last week that it was a good thing that even within doom he programmed a wide range of styles. The Drowning were the winners so far for me so time for some food. 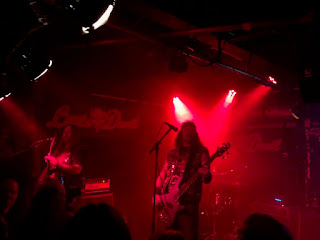 As from here things started to go pear-shaped for me. The Turkish pizza with shoarma tasted Ok but had a devastating effect on me. As my private doctor and wife Josie would explain today with a tiny bit of pancreas I have left this fat overdose caused a shock probably. So I stumbled back to LD finding that My Silent Wake was keeping the curve going up and performed Death Doom with a bit more variation than the Drowning did. This definitely raised my energy levels, but a new beer was out of the question. Now I was waiting for the band that got me there in the first place Iron Void. Some issues with an amp head resulted in a longer wait, which did not help me getting fitter. Luckily when Iron Void started all was good very fast. Their blend of NWOBHM and doom was live as great as on CD. two vocals dividing the job, a very lively presentation and such good songs. Actually they played most from the first two albums Iron Void and Doomsday that I don't know yet. This did not matter as songs like Doomsday, the Mad Monk and Path to Self Destruction went down very well at first hearing. Unfortunately my path to self destruction eating a greasy Turkish pizza started taking it's toll and I really needed some fresh air. So in spite of loving their set I walked out before the end and called it a day. This was especially a pity as I did not stop at the merch tables, which I would do near to end, not to carry stuff around all day. So if Iron Void return to Holland I promise to be there again and buy some CD's. Probably the same can be said about My Silent Wake and The Drowning. So a shitty end of the day fitting a shitty week. Things now can only get better. Next year there should be another LDDD, hope to be back.
Posted by erikprogtricolor at 11:47